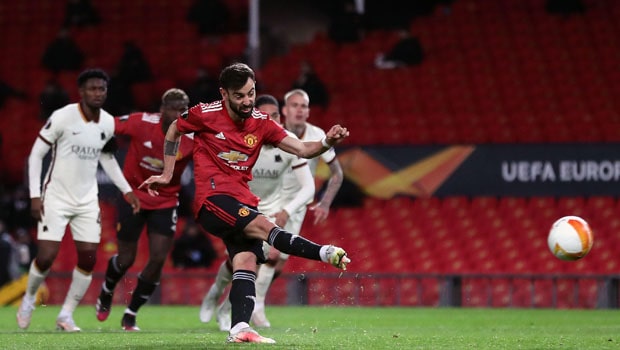 The chances of an all-English UEFA Europa League final was caught in the balance on Thursday evening as Manchester United and Arsenal both got contrasting results from their respective semi-final first-leg matches.

In the match played at Old Trafford, Manchester United secured a scoreline that would put the second leg in Rome in a mere formality mode.

The Red Devils took the lead through Bruno Fernandes in the 8 minutes before Pellegrini equalised for Roma minutes later from the spot, and he provided an assist for former Manchester City striker Edin Dzeko in the 34th minute.

Manchester United then got level in the second half just three minutes after the break as Edison Cavani equalised for the side.

The Uruguayan striker got another goal in the 64th minute before Bruno Fernandes got his brace with a penalty moments after in the 71st minute.

Meanwhile, at the Estadio De La Ceramica in Spain, Villarreal and Arsenal finished the game with 10 men each, but it was the Yellow Submarines who got the win with a 2-1 victory over the Gunners.

Unai Emery’s side faced his former side, and his team got the lead in the 5th minute through Manuel Trigueros and another goal through Raul Albiol in the 30th minute.

Arsenal got the valuable away goal through Ivorian forward Nicolas Pepe from the penalty spot in the 73rd minute.

Arsenal manager Mikel Arteta revealed that he is confident that his team can still get a win in the second leg and get a result that will get them into the final.

“We didn’t want to come here and lose, but after the way the game developed, you have to take the result. If you have to lose, it is probably the best result we could have. I am confident we have a chance to win.” Arteta said.

The 2021 UEFA Europa League final will be played on 26 May 2021 at the Stadion Miejski in Gdańsk, Poland.