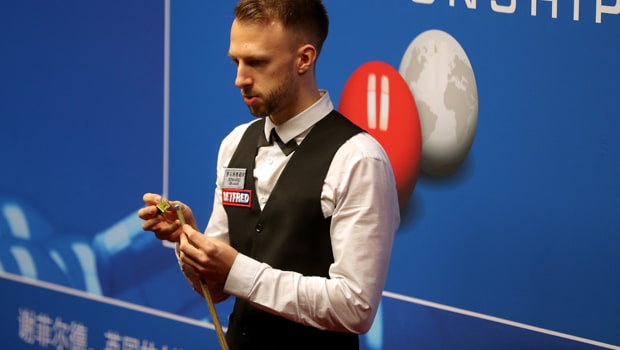 Judd Trump has one foot in the World Championship semi-finals after building a 7-1 lead over Stephen Maguire on Tuesday.

Both players went into the last eight clash off the back of some tough matches, with Maguire having needed a deciding frame to see off Tian Pengfei and James Cahill in his opening two rounds, while Trump was also taken the distance in his first round match against Thepchaiya Un-Nooh before claiming a 13-9 victory over Ding Junhui.

Indeed, the Juddernaut won six frames in a row to seal his victory over Ding and he took that momentum into the opening session of his clash with Maguire, establishing a 4-0 lead at the mid-session interval with breaks of 131, 67, 106 and 78.

The 29-year-old then went 5-0 up with a break of 101 – his third century of the match – and when he made it 6-0 soon after, world number 15 Maguire must have been left scratching his head at how he was going to get back into the match.

The Scot did win the next frame to get himself on the board, but Trump resumed his dominance in the final frame of the session to establish a six frame lead heading into Wednesday’s action.

Trump, who has won seven of his last eight meetings with Maguire, is looking to reach the semi-finals at the Crucible for the first time since 2015.

The world number seven has never tasted World Championship glory, with his best performance coming in 2011 when he made it all the way to the final before losing to John Higgins, but he is priced at 2.20 to go the distance and win the tournament this year.