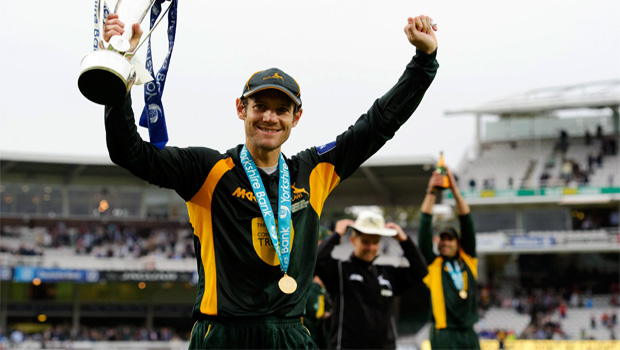 Chris Read finally had something to shout about after playing a major role in ending Nottinghamshire’s 24-year wait for a one-day trophy.

The 35-year-old has endured a torrid season with the bat, averaging just 19 in the County Championship while mustering a mere 93 runs in nine innings in the Outlaws’ march to the YB40 final.

However, Read scored a vital run-a-ball 53 – only his second 50 of the season in all competitions – to rescue Notts from a spot of bother at 90 for 4 to a more than respectable 244 for 8.

His innings proved to be the top score for Notts and with Stuart Broad, Ajmal Shahzad and Samit Patel taking three wickets apiece, Glamorgan never got close as they were bowled out for 157.

Read was glad just to be able to make a meaningful contribution to the Nottinghamshire cause in what had been an otherwise disappointing season.

“I’ve been terrible,” he said. “In all honesty I’ve done nothing different, I’ve worked so, so hard hitting balls left, right and centre and it just hasn’t worked for me this season. I’ve been consistent for a lot of seasons now so it’s had me thinking this season about what exactly is going wrong.

“At the end of the day sometimes it takes a big game like this to actually say that what it’s about is watching that ball and trying to do the best you can for your team. That’s what I set out to do from the start and did it pretty well.”

Notts still have to secure their Division One future when they take on Somerset in the final game of the season at Trent Bridge and Read is hoping that he will soon be able to sit down with the club and come to an agreement on extending his contract.

“The situation we’ve been in, with our precarious position in the Championship and this final, we decided to park it until the end of the season and see where we are at,” Read said. “We’ll have a good sit down and work out where the club needs to go and where I need to go and how we can go about building Nottinghamshire for the future.”