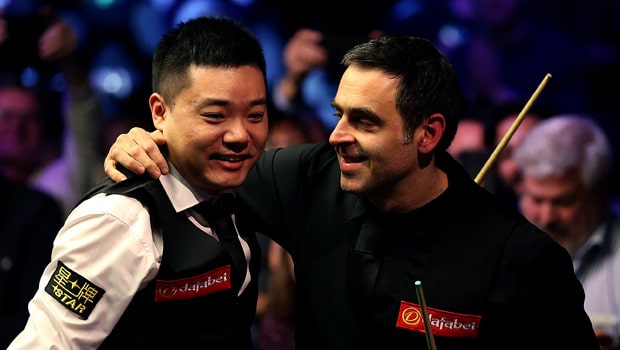 Ronnnie O’Sullivan and Ding Junhui looked both set for an early exit before rallying to progress to the next round in Milton Keynes. The former is a favorite for this title but could have been taken out in the very first round after falling behind in the first few frames of a tricky game with amateur, Brian Ochoiski.

The game could have easily seen a repetition of Ronnie’s European Masters run, where he lost to rookie Aaron Hill last month. Pre-game, not many would have thought it would be such a difficult tie for the Rocket, but it was a close shave for Ronnie who got off on the wrong foot, falling behind 2-0 after the first two frames.

Ochoiski compiled a century break to establish that important lead but the 2017 English Open winner responded with over 50 breaks on the bounce and a ton of his own to come out tops.

Many snooker fans would argue that Ding Junhui’s comeback was even more memorable, after knocking in contributions of 77,66,53 and 50 to claw his way back into the game. Before finding this winning streak, he was 3-0 down to Chinese competitor, Si Jiahui and in danger of suffering a whitewash. But three wins on the bounce got Junhui back into the game and took the game down to the wire which the Chinese professional comfortably won.

It was an easier day for Neil Robertson and Mark Selby after running riot over their competitors. Both stars completed a 4-0 whitewash over their opponents to secure a spot in the last-64.

Yan Bingtao, Liang Wenbo and Mark Allen were also able to rise above the challenge and make way into the next round of competition. As far as these stars are concerned, there were no surprise elements that could nip their brilliant start in the bud.

There were a bunch of other stellar results on the night as well. One involved Welshman Jamie Clarke and Ali Carter, where the former recorded an impressive 4-1 victory over Carter. Stephen Maguire was also brilliant on the night, posting a similar scoreline on the scorecard against Stephen Maguire.