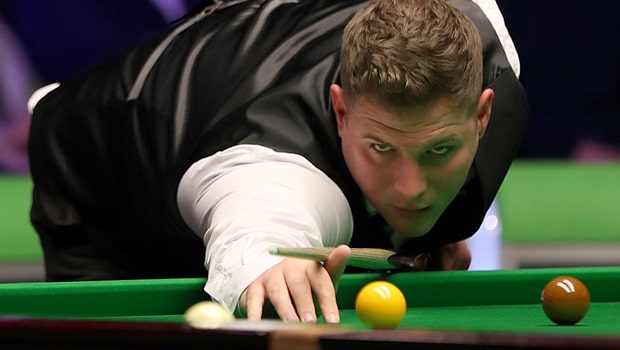 Daniel Wells will look to finish off his breakthrough season in style by clinching a place in the first round of the World Championships on Wednesday.

But the young Welshman is a frame down after the first session of his third qualifying round match against Martin Gould, who is 201.0 to win the World Championships.

Wells and Gould shared the first four frames evenly before the mid-session break but it was the ‘Pinner Potter’ who resumed in better shape, going 4-2 ahead.

But Wells, now 501.0 to win the tournament, showed grit and determination to come back from 56-0 down to take the seventh.

And he edged a scrappy eighth to keep himself in touch at 4-4, before his opponent took the last frame of a very long afternoon session.

Gould had whitewashed Egypt’s Mostafa Dorgham, the African champion, in the first qualifying round 10-0 – knocking in two centuries en route to the big win.

The 37-year-old then overcame Gerard Greene 10-6 in the second qualifying round.

Wells produced a blistering run to pull clear of Iran’s Hossein Vafaei and book his place on Judgement Day with a 10-6 win of his own. The Welshman trailed 6-5 when he summoned five consecutive breaks of 107, 83, 113, 100 and 65 to storm to victory.

Wells is aiming to cap off a fine campaign, which saw him reach his maiden ranking semi-final at the Scottish Open, with a first visit to The Crucible.