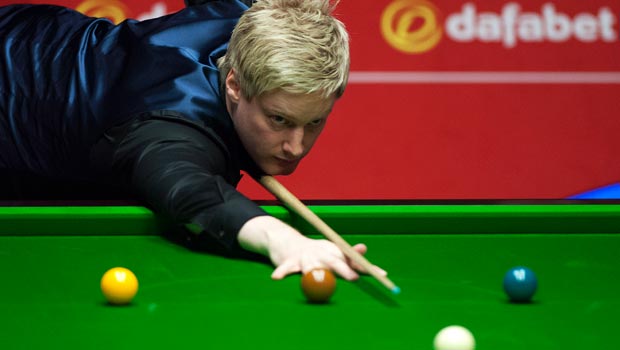 History was made at the Dafabet World Snooker Championships in Sheffield on Wednesday after Neil Robertson became the first player to score a century of centuries in a single season.

The World No.1 reached the milestone as he drew level at 11 frames all in his quarter-final with Judd Trump.

Spurred on by his achievement, and the ecstatic reception of the Crucible crowd, the Australian went on to win 13-11. He will now play Mark Selby in the semi-final after he breezed through against Alan McManus, 13-5.

Reflecting on his ground-breaking day, Robertson said: “Through most of the match it wasn’t going my way and it looked like I could get beat and I’d be stuck on 99, but that’s probably why it led to such celebrations and relief from myself and the crowd really enjoyed it too. It was like I made three 147s in a row; it was that electric.”

Meanwhile, Ronnie O’Sullivan breezed into the semi-finals after he thrashed 2005 winner Shaun Murphy 13-3. He will now play Barry Hawkins in the last four.

Leading 6-2 overnight, ‘The Rocket’ admitted he was surprised by how easy he swept past local hero Murphy by taking all but one of the eight frames in Wednesday’s session.

You just never know what type of match you’re going to get,” O’Sullivan said.

“You can expect a really tough match and it turn out easy like it did with Shaun. I didn’t expect to win it that easy to be fair. He’s a free-scoring great potter.

“He just missed a few balls and let me in quite easily. I still had to pot them but I didn’t have to fight for my chances.”