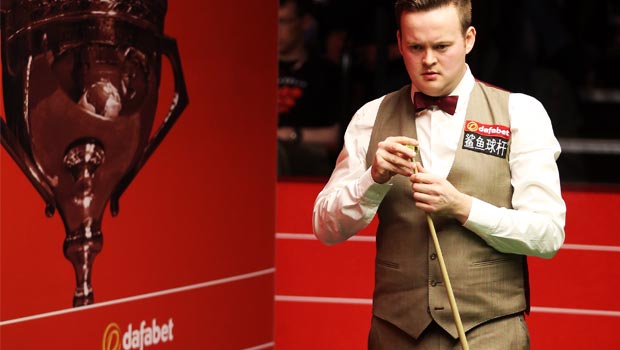 Shaun Murphy has described reigning champion Ronnie O’Sullivan as a “massive favourite” and a “genius” ahead of their Dafabet World Championship quarter-final clash at the Crucible.

Murphy will meet O’Sullivan for the first time since suffering a 13-10 defeat to the ‘Rocket’ at the last 16 stage in 2011 after he disposed of Marco Fu to reach the last eight.

“Ronnie’s a massive favourite to win the tournament,” said Murphy after his 13-8 success. “I’ve only beaten him once in all the times we’ve played – even though there haven’t been that many.

“He’s a genius and he’s the man everyone comes to see. The match is in his hands as I see it, if we both play our best then I think he wins.”

Murphy’s best display against O’Sullivan came in the 2009 Premier League Final when he notched a century break in the first frame and won 7-3.

O’Sullivan gained revenge in the last 16 at Sheffield two years later but went on to lose to John Higgins in the quarter-finals – a defeat which remains his last at the Crucible.

The 38-year-old from Essex was forced to battle his way past Joe Perry in round two, being outplayed by the Englishman in two high-quality opening sessions which left him trailing 9-7 in the best-of-25 match.

The next four frames were shared, before O’Sullivan won three straight to move ahead for the first time at 12-11 and seal the win a frame later.

“That was the closest I’ve been to going out here for quite a while,” he later told the BBC. “I was never in control of that match at any point.

“But I was determined to stay in it right to the end, I wasn’t going to give in. That’s probably one of the most exciting matches I’ve ever had at the Crucible.”

The Rocket is the 1.20 favourite to beat the 4.70 underdog Murphy in the Money Line (Best of 25 frames) betting with Murphy available at 2.40 to win the first frame – something he has achieved in five of their 11 previous matches.