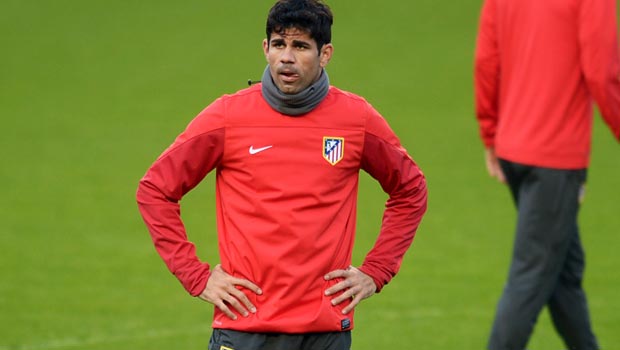 Atletico Madrid striker Diego Costa is confident that Chelsea will have to come out of their shell in Wednesday’s Champions League semi-final second leg.

Jose Mourinho’s tactics enabled Chelsea to earn a 0-0 draw at the Vicente Calderon last week and the Portuguese coach used a similar approach to triumph 2-0 at Liverpool on Sunday.

But Costa expects the west Londoners to attack more when the two sides meet at Stamford Bridge on Wednesday, with a place in the final up for grabs.

“I will be a different match to the one at home, they will have to come out and attack more.”

Atletico enjoyed 69 per cent possession last Tuesday and attempted 25 shots to Chelsea’s five, but the home side managed only four efforts on target and hardly troubled deputy keeper Mark Schwarzer after he replaced the injured Blues’ stopper Petr Cech.

Costa, who has scored 27 goals in La Liga and seven in the Champions League this term, will be the main focal point of the Atletico attack – but coach Diego Simeone could make changes elsewhere in his side.

Simeone rested Brazilian playmaker Diego for Atletico’s La Liga match at Valencia on Sunday with David Villa returning, but Turkish star Arda Turan could also come back in after playing two 30-minute cameos since recovering from a groin injury.

Following their 1-0 win at the Mestalla, the Colchoneros are two victories away from sealing their first Liga title since 1996 and Costa is dreaming of lifting the trophy at the Calderon.

“I want to win the league and it would be good to do it in front of our fans against Malaga,” he added.

Atletico Madrid’s next two Liga matches are a trip to Levante and a home clash with Malaga.

Atletico are 1.25 in the outright betting to win the Primera Liga, with Real Madrid second favourites at 4.5, but Simeone’s side are the 4.60 outsiders in the 2013/14 UEFA Champions League Winner market.