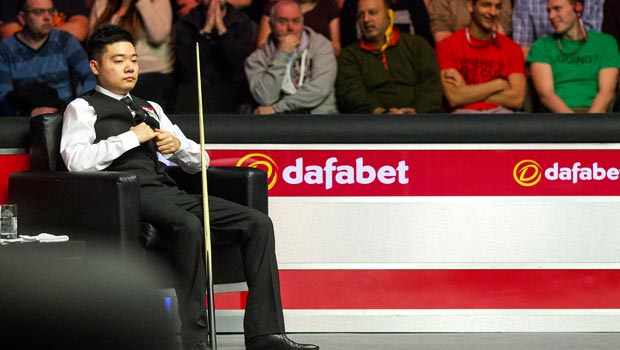 Ding Junhui will go to Sheffield as the second favourite for the Dafabet World Snooker Championship after winning his fifth ranking title of the season at the China Open on Sunday.

Not since Stephen Hendry in 1990-91 has a player achieved so much before the big season finale at The Crucible and Ding, 7.50, is now only behind reigning champion Ronnie O’Sullivan, 2.30, in the World Championship betting.

The 27-year-old, who moved to Sheffield from China as a teenager to hone his craft in the shadow of The Crucible, trounced China Open title-holder Neil Robertson in front of an excitable home crowd.

The Australian knew his chances of retaining his trophy were all but over after seven frames, when he trailed 6-1 to Ding.

The former world champion did not manage a point until the third frame and, although he won the fourth, Ding responded with a century.

Robertson stopped the rot with a century of his own in frame eight and the pair traded frames after that before Ding clinched victory with a break of 66.

“With so many wins, my mindset is very different than before. I’m getting more and more experienced, playing many finals, especially playing Ronnie O’Sullivan in the Welsh Open final.

“I think I learned a lot from that match. I hope there will be more finals to come.”

Robertson, the 8.50 third favourite for the World Championship, refused to blame the defeat on a virus he had struggled with all week but described the final as “one match too far”.