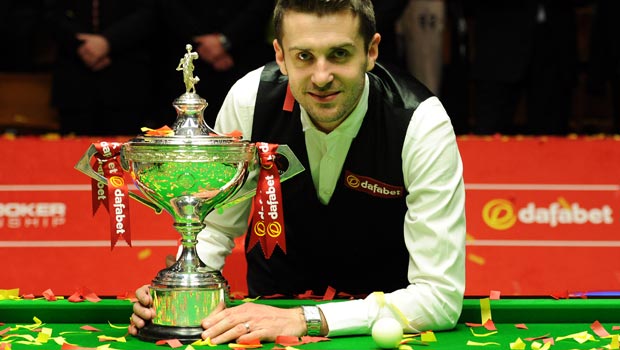 Mark Selby claimed his first World Snooker Championship title as he came from behind to secure an 18-14 win against Ronnie O’Sullivan at The Crucible in Sheffield on Monday night.

The 30-year-old ‘Jester from Leicester’ had trailed 8-3 and 10-5 during Sunday’s opening exchanges, while he started Monday 10-7 behind five-times champion ‘The Rocket’ O’Sullivan who seemed on course to win his third title in a row.

However, Selby mounted his comeback mission and edged 12-11 in front of his opponent going into the vital evening session.

O’Sullivan did get level at 12-12 from the opening frame, before Selby again hit back to move 15-12 ahead going into the interval.

Back came ‘The Rocket’ with two successive frame wins when battle resumed to get back to 15-14 only for Selby to respond like a champion with his first century of the match. A break of 87 took him to within one frame of glory at 17-14 and he held his nerve with an impressive clearance of the colours to clinch it.

Selby, who had already lost in the final of both the UK Championship and Masters this year, told the BBC: “(It’s) amazing really. It couldn’t be better. You want to win it with Ronnie in the tournament and there’s no better way than playing him in the final.

“I want to thank all my supporters, my wife Vikki and the family and everyone who’s stuck by me.”

On his comeback, he added: “I was just my usual self, dug in and never gave in. I didn’t play pretty snooker early in the match but towards the end I played well.

“It was a tough day yesterday. The last two frames were huge. To get back to 10-7 – any other score, I had no chance.”

Don’t forget to check out all Dafabet snooker markets for upcoming events.