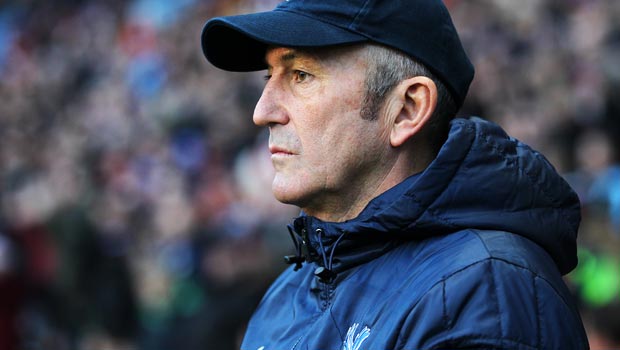 Crystal Palace manager Tony Pulis has confirmed that he will sit down with the club’s hierarchy in the near future to discuss his future at Selhurst Park.

The 56-year-old former Stoke City boss replaced Ian Holloway at Palace in November of last year with the side struggling at the foot of the Premier League table and looking destined for relegation back to the Championship after just one season in the top flight.

However, Pulis dramatically turned around the club’s fortunes and they are set for a respectable 11th-placed finish, 11 points clear of Norwich in the final relegation place with just one game of the season remaining.

The Welshman has been put forward as a candidate for the Premier League Manager of the Year award, while his side displayed the battling qualities he has instilled into them on Monday night by storming back from three-down in the final 11 minutes against title hopefuls Liverpool to secure a 3-3 draw.

Despite his success Pulis’ long-term future is still not clear and he is unsure if he will still be in charge of the south Londoners when the new season starts in August.

Palace co-chairman Steve Parish confirmed that he would like him to stay and Pulis revealed after the Liverpool game that he will hold talks this week.

He told Sky Sports: “We’re having a chat on Wednesday or Thursday me and Steve and just have a night together where we can sit down and talk about everything.

“The club is a smashing club, it’s got fantastic support and fantastic potential, but it’s a way behind what it should be. But that was the same situation at Stoke.

“I had a magnificent chairman there in Peter Coates who backed me and allowed me to build the football club up for seven, eight years. That’s what you want, the backing and let people do your job. You get paid to do your job, and I enjoy doing this job.”

Palace will look to end their season on a high note on Sunday when they travel to face relegated Fulham at Craven Cottage. The Eagles are 2.01 with -0 Handicap and Fulham are 1.92 +0.