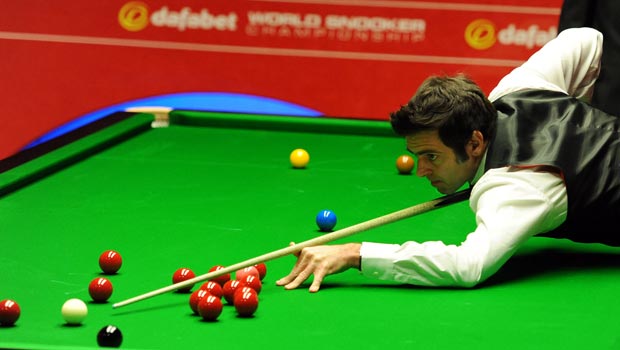 Ronnie O’Sullivan is in confident mood ahead of his bid to secure a third consecutive Dafabet World Snooker Championship at the Crucible Theatre in Sheffield.

O’Sullivan overcame Barry Hawkins 18-13 in the final last year to successfully defend his crown and has been in fine form in the build up to this year’s edition of snooker’s showpiece event, having won the Welsh Open last month and The Masters earlier this year.

O’Sullivan has previously been guarded on his chances of matching or bettering Stephen Hendry’s record of seven world titles but victory at the Crucible this year would leave him just one shy of the Scot’s record and ‘The Rocket’ is in confident mood.

“I’ve won so many tournaments now that you just accept it, it’s part of the job,” O’Sullivan said.

“It’s about stacking it up and getting the CV looking as nice as you possibly can so when you don’t play, people can say he won this, won that, had this amount of maximum breaks, this amount of centuries.

“For me it’s about winning all the major, major events: the UK, the Masters, the World.”

O’Sullivan has broken one of Hendry’s records recently as he grabbed a 12th career maximum in the final frame of his Welsh Open final win over Ding Junhui and the 38-year-old insists he is still looking to add to his list of individual achievements.

“That’s a nice record to have,” he added. “A little bit of me just felt it’d be nice to get one of his records, he’s got so many.”

O’Sullivan is currently priced at 2.30 to win the Dafabet World Championship, which begin on April 19 and runs until May 5.