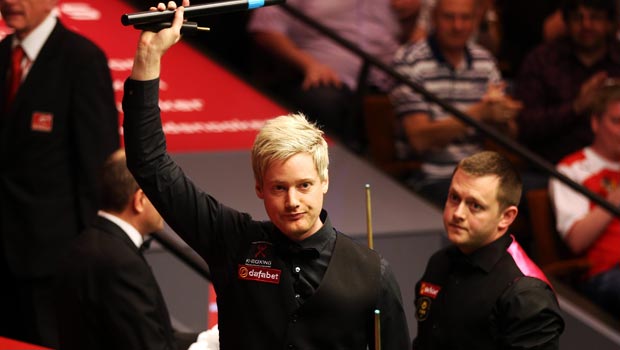 Neil Robertson says he faces a tough test in the quarter-finals of the World Snooker Championships, whoever he faces.

The world number one booked his place in the last eight with a 13-7 victory over Mark Allen and will now face either England’s Judd Trump or Welshman Ryan Day.

Trump is the hot 1.04 favourite to go though as he leads their match ahead of the resumption in Monday night’s session, but Robertson knows to expect a tough test no matter what.

“It probably looks like Judd Trump,” he said. “He’s got a good lead, 10-6, so another player who will probably one day win the World Championships as well. I will just go out and play my game.”

The match against Allen resumed with Robertson leading 9-7, but the Australian wasted no time in seeing out the victory, with breaks of 59, 69, 94 and 92.

Robertson reserved special praised for his opponent but was obviously delighted to get through.

The match resumed with Robertson leading Northern Ireland’s Allen 9-7, but the Melbourne-born cueman wasted no time in racing to victory, with breaks of 59, 69, 94 and 92 wrapping up the win.

“Throughout the whole match Mark kept sticking with me and I thought he played really well,” Robertson said.

“He’s always going to score really heavily but his safety was really good and I didn’t have many opportunities at long balls.”
In the other afternoon game on Monday, Dominic Dale wrapped up a 13-4 win over Michael Wasley.