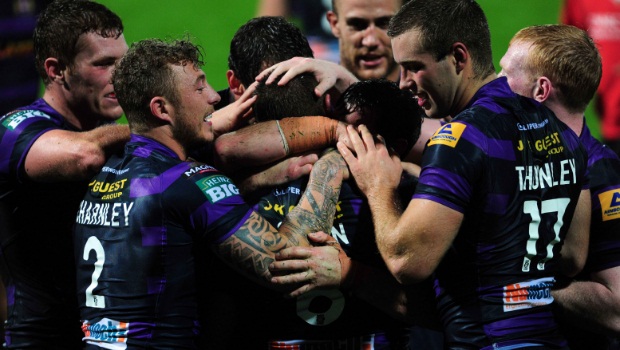 Wigan Warriors reached the semi-final of Super Leagues play-offs with a convincing victory over Huddersfield Giants on Thursday night.

The Warriors went into the first of the season-ending play-off encounter aware of the fact that their opponents had done the double over them in the regular season as the Yorkshire side went on to top the table.

In addition, Giants coach Paul Anderson had rested practically the whole first-team squad for the match with Bradford Bulls the week before, and it was thought that would give them the edge at the John Smith’s Stadium.

And, with just four minutes on the clock, a solo try from Danny Brough got the Giants off to the best possible start. Rather than capitulate though, Wigan were stung into action, and responded in the best possible way, with Josh Charnley leading the way with two of the Warriors’ three tries as they went on to inflict a 22-8 defeat on the home side.

Wigan coach Shaun Wane was delighted with his side’s application.

“I thought it was a great performance. We defended tough and came up with a really good conservative game,” he said.

“I thought we completed the sets that were really important. We still made errors but our completion rate was good in those conditions.

“We showed in the first half that, when we kept hold of the ball, we could score.

“We’re not getting carried away. It was a good win against worthy league leaders but we’ve still got two games to play.”

The bonus for the winners is a week off, while Huddersfield must play again next Thursday when they meet the lowest-ranked winner of this weekend’s sudden-death play-offs in a semi-final eliminator.