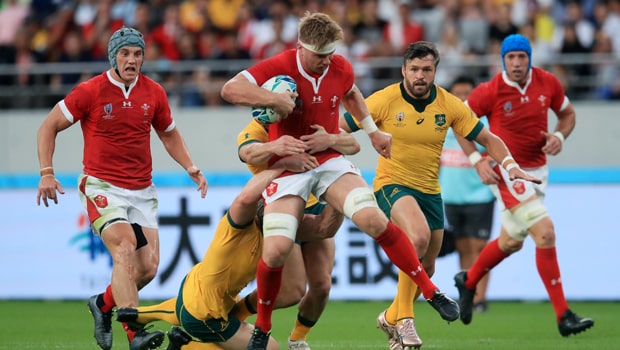 The action returned in the ongoing Rugby World Cup in Japan on Sunday as Pool D saw Wales endure a late fightback from Australia to win the game 29-25 -improving their chances of topping the pool.

The Six Nations champions had earlier on beaten Georgia 43-14 in their opening game, and with their next pool game against Fiji and Uruguay, the Europeans may fancy their chances of ending the pool games unbeaten.

They will face Fiji on October 9 in Oita and then advance to Kumamoto where Uruguay will lie await four days after.

Wales started the game brightly and early in front of a packed 47,885 crowd, getting their first drop-goal in just 37 seconds into an exciting game of rugby in the Japanese capital.

Aaron Wainwright had gotten the better of Australia’s Jackler Micheal Hooper at kick-off, as Gareth Davies fed Dan Bigger who got the very first drop-goal of the game.

Biggar was a thorn in the flesh for the Wallaby but hit a penalty attempt wide moments after the opening drop-goal before he wasted another shot as Wales attacked relentlessly.

After 43 minutes into the game, Wales looked like runaway winners of the game with the scoreline at 26-8, but a fightback from Australia reduced the margin to one point before Wales managed to escape by whiskers.

The referee for the game, Frenchman Romain Poite had questionable calls over the course of the game, one of them being Hooper’s late, high hit on Biggar be which he only awarded a penalty for without cautioning the earring player.

With the World Rugby statement where match Officials had admitted to sub-par officiating after the first round of games in the world cup, one would have expected improved officiating especially in a game of this Calibre.

Nevertheless, the game became frantic as Toomua hit a 69th-minute penalty to put the Aussies to one point behind Wales who had before been leading by wide margins.

However, Wales managed to see out the last five minutes of the game, keeping their lead and winning the game which has a history of always been a close call.

Wales are backed at 8.75 to win the Rugby Union World Cup. While hot favorites New Zealand are fancied at 2.05.