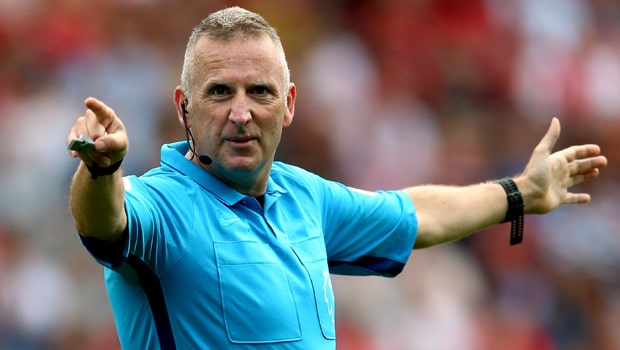 Norwich fans would be displeased with the referee Jon Moss after a controversial penalty call halved their chances of overcoming Crystal Palace.

Ibrahim Amadou was left surprised after the center referee pointed to the spot following a challenge on McArthur just inside of 21 minutes.

The challenge by the defender was clumsy, but replays showed that the referee might just have been deceived by McArthur’s acting.

In the defender’s attempt to recover the ball, McArthur flopped over his legs and fell to the ground before waving his arms to the referee in protest of the tackle.

The referee pointed to the spot, and it was none other than Luka Milivojevic – one of the deadliest penalty takers in the world – who stepped up to take the kick. The midfielder converted and handed the Eagles the lead.

Norwich had fallen behind to a controversial penalty and were pegged once again by an injury to their goalkeeper Ralf Fahrmann who was then replaced by 35-year-old McGovern.

It was the third choice’s debut in England’s top-flight following an injury to Tim Krul who should have been ahead in the pecking order.

However, these setbacks weren’t enough to keep Norwich at bay. They were instead galvanised to secure a win or at least share the spoils away from home.

Incredible Finnish striker Teemu Pukki soon sparked to life and forced Vincent Guaita to a fingertip save. Todd Cantwell then shot at goal but had his ball cleared off the line by the centre-bac Martin Kelly.

It was a busy day at the office for Guaita, who was called into question once again. The goalkeeper did superbly to shut bustling Emiliano Buendia out just before the interval.
Norwich soon had a penalty call of their own after Teemu Pukki had thought hisupp.

However, that call fell on deaf ears and a VAR review by the referee Jon Moss proved that the decision was spot on.

All hopes of a remarkable comeback were soon laid to waste a minute after the interval following some magic from Wilfred Zaha. The Ivorian executed a brilliant solo dribble before setting up Andros Townsend who made no mistake about dispatching it into Norwich’s goal.

Norwich will face Aston Villa in their next EPL fixture; The Canaries are priced at 2.35, while Villa are available at 2.94.