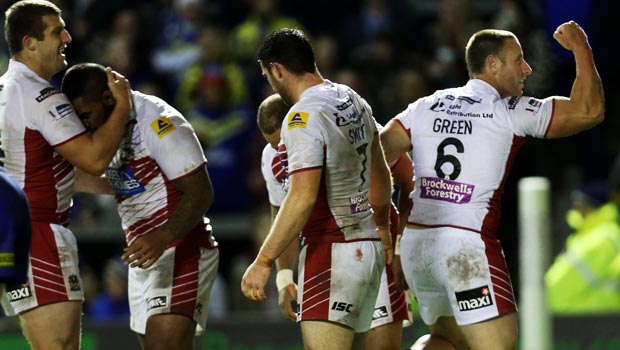 It’s a re-run of the 2013 Grand Final tonight as Warrington Wolves take on defending Super League champions Wigan at the Halliwell Jones Stadium.

After losing their first two games Warrington are on something of a roll, three straight victories making a mockery of premature suggestions that Tony Smith’s side are past their sell by date.

The Wolves go into what should be a titanic tussle in sixth, two places higher up the table than Wigan who have a won two, lost two record after the first four rounds of action.

Captain Sean O’Loughlin is still absent for Wigan, who won 34-20 when the sides last met at Old Trafford, with a shoulder problem, whilst hooker Michael McIlorum is still missing due to suspension. Warrington expect to have experienced Australian forward Trent Waterhouse back.

Last season Wigan came back from 16-2 down to reel off 32 unanswered points and win domestic Rugby League’s greatest prize.

And the pain of that defeat, says Warrington star Richie Myler, will serve as inspiration going into the match of the season so far.

“I don’t think that will ever leave my memory,” Myler said. “To lose in any final hurts but to lose in the Grand Final was a tough one.

“It’s not been spoken about much though, as we know what we need to do in terms of performance. We have to be on our game to beat Wigan and hopefully that’s what we’ll do.

“Wigan had the distraction of the World Club Challenge which was a tough one for them, but they are building in the right way now – as we are too – their performances are showing that.”

Matches between the two sides are normally tight affairs and Wigan boss Shaun Wane is anticipating another tough test.

“They’re in a transition period, like us, and their form has not been the best at the start of the year, but I watched them at Salford and they were very good,” said Wane.

“These are the games we need to perform in, with the way they play, with fast play the balls, they can put you on the back foot.

“All 17 players selected need to have one of their best games, and that is the pressure of playing in these top encounters.” Wigan are 1.96 getting a 6.5 point start on the handicap list.