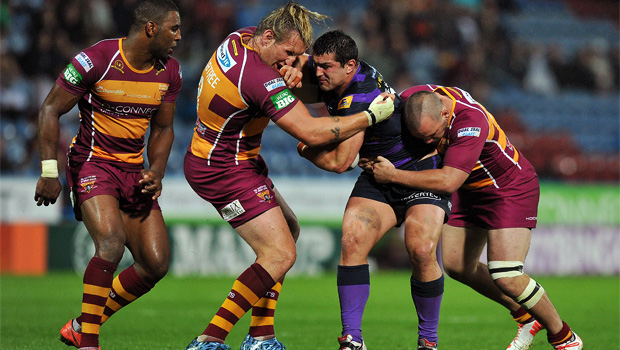 Huddersfield Giants get their Super League playoff quest under way this evening when they take on Wigan Warriors at the John Smith’s Stadium.

The Yorkshire side go into the season-ending deciders having topped the regular season standings on 42 points, seven more than Wigan, who finished fourth.

The Yorkshire side have a psychological edge over their opponents tonight as well, having done the double over them already, and rattled up no less than 190 points in the final five games of the regular season.

Quite a few key players sat out last week’s 58-6 demolition over Bradford Bulls, and will line up fresh and eager to win this qualifying play-off.

Wigan, in contrast, will be without captain Sean O’Loughlin, and it is significant that when Sam Tomkins does not have him to play alongside, the Warriors’ results have been sketchy to say the least, with nine losses and just six wins.

One player the Warriors will need to close down on is scrum-half Danny Brough who, with a staggering 283 points scored this season, is likely to once again be a big danger with the boot.

There is a lot at stake tonight, as the winner receives a bye to week three, so will have plenty of time to recover, and of course the highest placed side gets to choose their semi-final opponent.

It is not the end for the loser this evening either, though, as they get another bite at the cherry in week two.

The Grand Final is at Old Trafford on Saturday October 5.