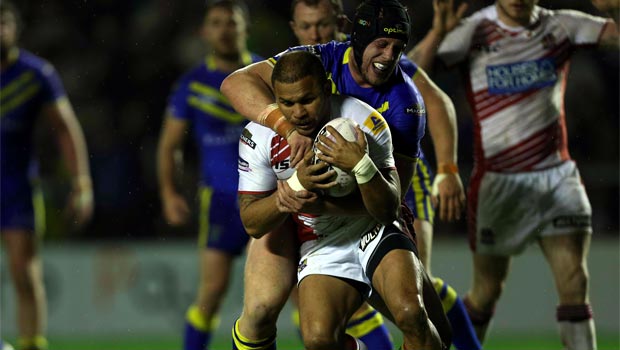 Wigan Warriors turned in their best performance of the season to beat Warrington 12-4 and move up to sixth in the embryonic Super League table.

In a game of few try scoring chances, played out in wet conditions at the Halliwell Jones Stadium, the Warriors defended superbly to keep their line intact until the 61st minute.

England second rower Liam Farrell scored one try and sent acting captain Blake Green over for another as the Warriors condemned Warrington to a second defeat in three home matches.

Gene Ormsby’s intercept try threatened to derail all the visitors’ hard work, but Wigan’s players continually put their bodies on the line – with Ben Flower and Logan Tomkins to the fore – to see the two points head back to the JJB Stadium.

“It’s a big win for us,” Wane said. “I’ve seen this performance coming.

“We’ve played well in patches but today we showed some consistency. We showed some real toughness which was the pleasing thing for me.

“I thought we defended really well and we bombed a couple of tries in the first half. I thought we were well deserved winners of that game.

“We spoke about nothing but defence all week and they stood up. The resilience the players showed for young kids was outstanding. It puts us in a real good stead as a club.

“It’s a tough place to come but we were very good in difficult conditions.”

Wane was especially pleased with the contribution of his half-backs Matty Smith and Green.

“I thought we were smart and the way the half-backs managed the game and guided us around the park was the most pleasing thing for me,” he said.

Warrington boss Tony Smith bemoaned his side’s error-strewn performance, saying: “I thought without the ball we were probably as physical as I’ve seen my team for a long time, which is a real positive to take from it but with the ball we were dreadful.”