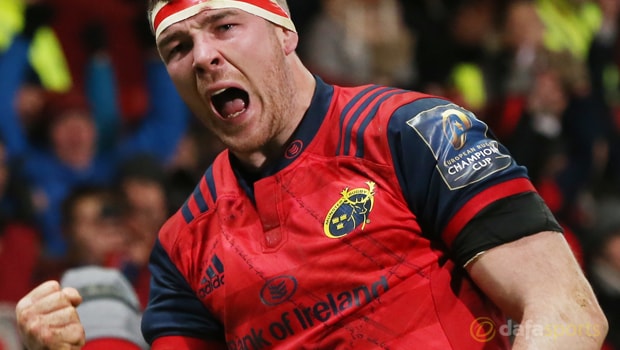 Peter O’Mahony admits that Leinster are the European club rugby benchmark now, but he has vowed that teams will queue up for a shot at them.

O’Mahony and his Munster teammates travel to the RDS for a Guinness Pro14 semi-final on Saturday hungry to steal some of the newly crowned Champions Cup winners’ limelight.

Leinster ground out a victory over Racing 92 in last weekend’s Champions Cup decider in Bilbao, and O’Mahony says they are worthy European champions.

“It’s a massive challenge,” he said. “Everyone is jealous (of Leinster), everyone wants to be like you.

Every club in Europe now wants to be like Leinster and be where Leinster are. It’s 100 per-cent deserved.”

With that in mind the Munster flanker suggests that Leo Cullen and his men will now have to be ready for everyone raising their own games to face Leinster.

The fierce rivalry between the Irish provinces is well documented and O’Mahony is eager to have the first crack at some of his international teammates on the field.

“That’s unfortunately something that comes with being the champions,” he added.

“They have been the best team in Europe in my opinion… but what comes with it is every team wants to knock you. We get the first chance.”

South African lock Jean Kleyn backed up O’Mahony’s sentiments but he says Munster have got to make Saturday’s trip to Dublin about themselves.

“We look forward to getting them on their home ground. All the boys are very aware of the fact that if we don’t win our season is over. We really want that trophy and we really want to win.”

Leinster are 1.36 to defeat Munster at the RDS, with the visiting side 3.50 to get the win.