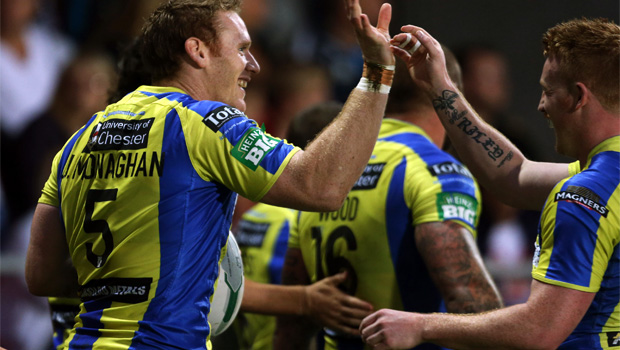 Warrington have made what seems a surprising move after deciding to play Huddersfield in the Super League play-off semi-finals with their Club Call decision on Sunday.

The Giants had the chance to make the call having finished the regular season on top of the table but lost their qualifying play-off to Wigan
8-22 at the John Smith’s Stadium.

That allowed Warrington the chance to call the shots and they duly obliged by beating Leeds 40-20 at the Halliwell Jones Stadium.

Having beaten the defending champions comfortably en route to the last four, many were expecting the Wolves to take on the Rhinos again in the semi-final clash but that has turned out not to be the case.

Tony Smith has been critical of the Club Call system in the past, previously labelling it as a ‘ridiculous gimmick’, and he did not attend the announcement but it could be seen as a surprising move after the Giants claimed the League Leaders Shield.

Huddersfield boss Paul Anderson is refusing to take the decision as a slight against his team and insists they would be facing a ‘challenge’
whatever the decision.

Adrian Morley has insisted the players are ‘100 percent’ behind the Wolves’ board’s decision to plump for the Giants and, like Anderson, concedes that there are no easy games at this stage of the season, saying ‘it would be tough either way’.

Leeds will now of course travel to the DW Stadium to take on Wigan and do have happy memories of their last visit there, winning 20-6 on the last game of the regular season earlier this month.

Rhinos boss Brian McDermott is relishing the prospect of another battle with the Warriors after the recent success but insists that getting a result will be a ‘big ask’.

Leeds of course edged St Helens 11-10 on Friday to maintain their hopes of a third straight Super League title but do now have fitness concerns ahead of the Wigan trip after Jamie Jones-Buchanan and Brett Delaney sustained knee and groin injuries respectively.