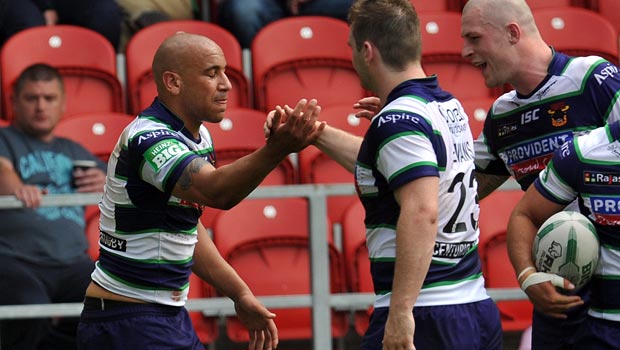 Bradford Bulls star Matty Blythe is calling for a response from the Super League strugglers when they take on Hull KR after a turbulent week.

They left the club second-bottom in the Super League and with plenty to do if they are to avoid relegation, having claimed just two points so far this season.

Bulls skipper Matt Diskin is now acting as a temporary player-coach and will take charge of the team for Friday night’s visit of Hull KR to Odsal.

He has a big job because he knows defeat could leave the side 10 points from safety, and, after a disappointing 46-18 defeat to Salford Red Devils last Sunday, second-rower Blythe insists the team need to respond against KR.

“It’s going to be another massive game and we need a response after last week but we’re looking forward to the challenge after a difficult few day,” Blythe told the Telegraph and Argus.

“We’ve just got to try and get on with the job in hand now and that means getting a result on Friday. It has been a bit weird with Disko taking the reins but we’ve come up with a game-plan and we need to stick to it.

“Galey has done a great job too and we’re all chipping in and working hard for each other. Like I said, off the field it was obviously very disappointing to see Franny go but on the field we’ve got a job to do.”

Hull KR have won the last two meetings with Bradford and beat the struggling side 16-0 in March.