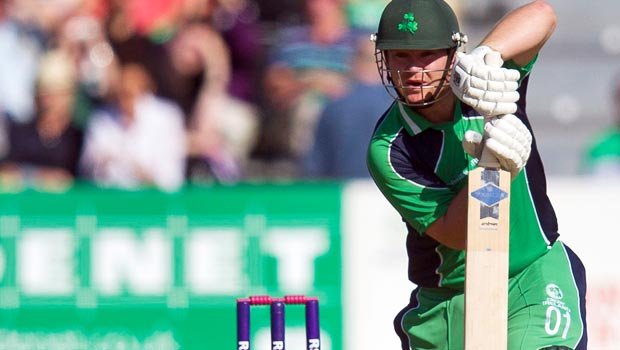 Ireland captain William Porterfield is confident his side will be able to spring another surprise at the Cricket World Cup in 2015.

Porterfield has been a part of the Ireland team which has caused upsets at both of the last World Cups and he was also captain for the 2011 tournament.

In 2007, Ireland recorded a famous St Patrick’s Day win to send Pakistan, ranked fourth in the world at the time, home. And in 2011 Kevin O’Brien hit the fastest ever World Cup century off just 50 balls to inspire the Irish to a stunning victory over England in Bangalore.

After Thursday’s draw for the group stage of the World Cup in Australia and New Zealand next year, Porterfield believes there could be more shocks on the way.

“We’ve managed to pull out big results in the World Cups before, we’ll be expecting nothing different from ourselves come February/March,” he told The Slog Sweep podcast.

“There’s a big Irish community down there and hopefully they can come out in their numbers and support us.

“We know we can go out there and beat anyone on our day, I think we’ve shown that in previous World Cups.

“The first and foremost aim is to get through that group (to the quarter-finals) and from there anything that can happen. I think there’s no reason why we can’t do that.”

Ireland have been drawn in a group with the West Indies, UAE, South Africa, Zimbabwe, India and Pakistan. The top four teams in the group will qualify for the quarter-finals.

Australia are the current favourites to win the World Cup in 2015 and are priced at 4.00. Ireland can be backed at 51.00 under ‘Any Other Team’.