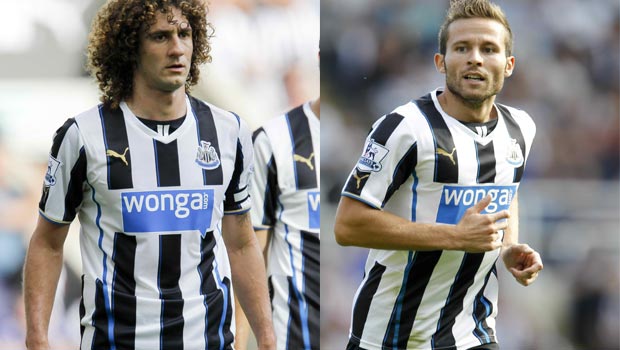 Newcastle manager Alan Pardew has played down talk Yohan Cabaye and Fabricio Coloccini want to leave the club, despite both players admitting this week they are considering their futures.

The Toon looked set to lose two of their star assets in Cabaye and Coloccini in the summer, with Argentine centre-half Coloccini strongly linked with a return to South America.

Cabaye was the subject of a failed bid by Arsenal and sat out the opening three matches of the season in the hope of forcing through a move elsewhere.

Talk of both players leaving St James’ Park had gone quiet since then before both players gave interviews this week suggesting they aren’t entirely happy in the north east of England.

Cabaye was quoted as saying he misses playing in the Champions League and will be assessing his future at the end of the season, while Coloccini once again hinted he wants to return to Argentina.

Pardew has now moved to reassure supporters the club won’t be losing two of their best players in January or next summer, insisting Cabaye can achieve his dream of Champions League football with Newcastle.

“Sometimes you know when they are abroad they get asked questions that are slightly loaded, that have slightly different connotations to them,” he said.

“But if you were to ask me if I wanted to play in the Champions League, then I would tell you ‘absolutely, yes’.

“And that’s what Yohan wants to do, of course he does. But we want him to do that here.

We are trying to build that but it is difficult and it’s only players like Yohan Cabaye that are going to get us there.

“As far as Colo is concerned, he is our captain and it is well documented that last year the pangs of home were pulling on him.

“But he’s a professional, a professional player here who has been brilliant for us. The only reason I am commenting now is just to let our fans know there is no big deal.”

Cabaye has been instrumental in Newcastle’s recent excellent run of form, helping them climb up to eighth in the Premier League with three successive victories.