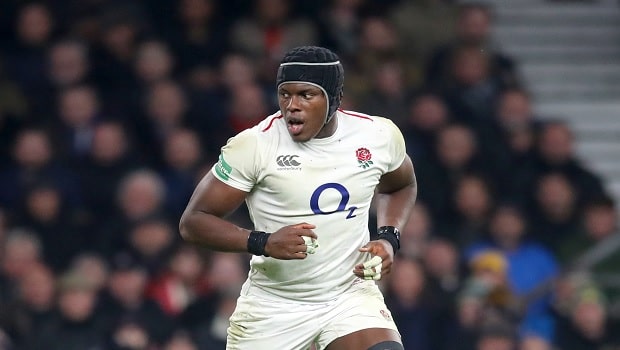 Eddie Jones suggests Maro Itoje can be the ‘best lock in the world’ but he’s also confident England can win the Six Nations without him.

The Saracens powerhouse sustained a medial ligament injury in England’s impressive 32-20 win over holders Ireland in Dublin on Saturday.

It was a statement performance from the Red Rose, dethroning the Grand Slam champions in no uncertain terms on their own patch.

The full extent of Itoje’s injury is likely to be revealed by a scan on Tuesday.

Joe Launchbury and Courtney Lawes could fill in if the Saracens player is ruled out for the remainder of the Six Nations campaign and Jones feels they are able deputies, despite the sheer quality of Itoje.

“Maro’s going to be the best lock in the world so it’s a big loss, but we’ve got good depth,” Jones said. “We’ve got Joe Launchbury ready to come back in and you saw Courtney Lawes come off the bench for us.

We’ll have to fill his spot and guys will just have to work that bit harder to cover his gap for how long he is out for.”

England out-thought and outfought Ireland at the Aviva Stadium, avenging back-to-back losses against Joe Schmidt’s team in some style.

Jonny May and Elliott Daly touched down in the opening half while Henry Slade twice crossed the whitewash after the interval in an impressive and dominant England display.

Next up is France at Twickenham on Sunday, with Les Bleus still reeling from a second-half collapse that saw them turning a 16-0 half-time lead into a 24-19 loss to Wales in Paris on Friday night.

England are 1.18 to overcome France this weekend, with the visitors priced at 5.50 to come away from London with a victory.