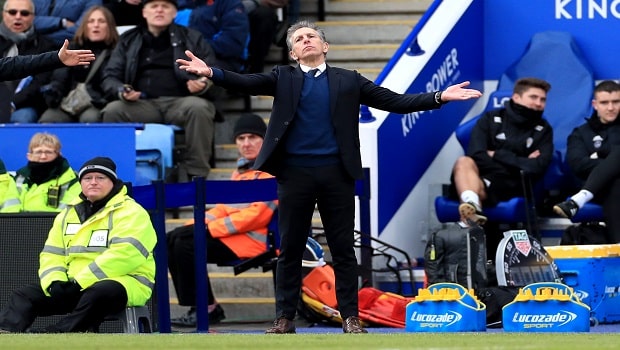 Claude Puel felt Leicester’s 1-0 loss at home to Manchester United was not a fair outcome, though he admitted he was ‘angry’ at the way his team started the game.

The Foxes were slow coming out of the traps as Marcus Rashford fired United into a deserved lead after just nine minutes, the England forward superbly controlling and dispatching a lofted pass from Paul Pogba.

Leicester worked their way into the game thereafter and became stronger the longer the match went on but ultimately they could not restore parity.

They had some decent chances in the second half but David de Gea in the visiting goal was on hand to make a vital saves in denying Jamie Vardy and Rachid Ghezzal.

Deep into stoppage time at the end Harry Maguire blasted wide when he might have secured a point for his side. Leicester had fallen behind after two minutes against Liverpool at Anfield in midweek and, once more, Puel was frustrated that they gave themselves an uphill task.

“When you see all the chances and half-chances we had, we deserve a minimum of a draw,” Puel told Sky Sports. “I think it’s not a fair result but I’m angry about our poor performance at the beginning of the game.

To concede another goal early, to have to chase the game is always difficult.” They are now without a win since New Year’s Day, a run of six games in all competitions and, with his own post under intense scrutiny, Puel is urging his players to believe in their own ability at all times. “I don’t understand sometimes, it’s crazy.

At the beginning we don’t believe enough in our quality because after, when we play, we play forward with good intention and can hurt a team like United,” he suggested.

Another tough task awaits on Sunday, with Leicester 5.25 to beat Tottenham at Wembley. Spurs are 1.67 while the draw is 4.00.