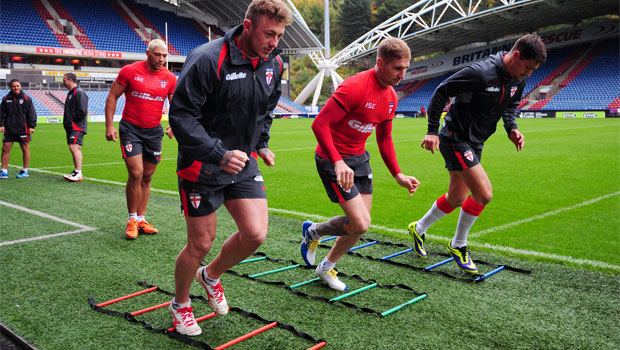 Josh Charnley says he hopes his brace against France in the last round will keep him in England side for the World Cup semi-final clash against New Zealand.

The winger had been in excellent form for club side Wigan Warriors over the past two years, scoring more tries than any other player in Super League.

As such the 22-year-old was expected to be one of the stars of the World Cup and got his tournament off to the perfect start with a try in the opening game against Australia.

However, England coach Steve McNamara decided to bench Charnley for the next two group matches, with Leeds Rhinos’ Tom Briscoe getting the nod.

He was restored to the starting line-up for the 34-6 win over France in the quarter-finals, Charnley going over twice to take his tally for the year in all competitions to 46.

The Wigan ace hopes he did enough in the game at the DW Stadium to keep his place in the team, admitting he found it difficult to watch the games against Ireland and Fiji from the sidelines.

“It has been difficult but it’s one of those things,” Charnley said. “I’ve tried but not just been picked.

“The squad has been impressive so it’s been hard to get back in the squad. Hopefully, I have done enough to keep my place.

“If you don’t get picked you have got to try and work hard and try to get the nod. I have tried my hardest for the past two weeks and I got the nod.

“It’s my first World Cup and I am still learning. He [McNamara] knows what he is doing so I have got to bite my tongue and just try to work hard to get back in.”

Charnley admitted England will have to improve massively on their display against France if they are to topple world champions New Zealand this weekend at Wembley.

“We know we can play well but we are making too many unforced errors and giving them too much ball which means more tackling and it’s tiring us out.
When we are attacking we are on the back foot,” he added.