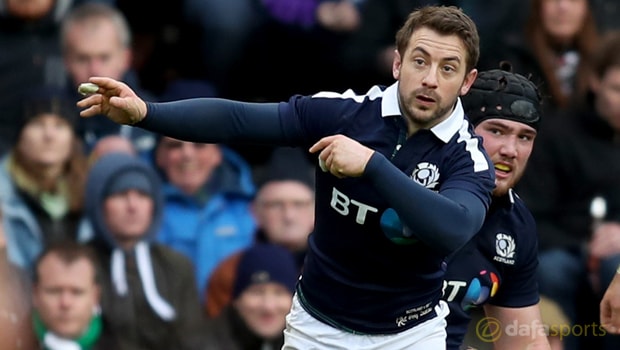 Skipper Greig Laidlaw says Scotland must be “subtle and clever” as well as physically up for the challenge if they are to down France in Paris this weekend.

The Scots have not claimed a Six Nations victory on French territory since 1999 but they arrive in the capital brimming with confidence having overcome Ireland in last week’s opener at Murrayfield.

France have not finished in the top half of the Six Nations since 2011 but impressed in narrow defeats against New Zealand and Australia in last year’s autumn series.

They also threatened to end Eddie Jones’ perfect record as England manager when going down 19-16 at Twickenham in their tournament opener last Saturday.

Laidlaw has no doubts that Scotland will have to produce in all facets of their game should they have designs on victory at the Stade de France.

“We’ll need accuracy and we need to be physical and aggressive because the French are big men. But we need to be subtle and clever in our attack,” Laidlaw said.

“If we do that, and move France about and play for 80 minutes, I would back our fitness against them. But we obviously need to be in the game right to the death and not let France get any momentum.”

France have improved under the stewardship of Guy Noves, says the Scottish scrum-half.

While enjoying an overdue victory over France in Edinburgh last season, Laidlaw concedes Scotland will need to improve if they want to end their nine-game losing streak in Paris.

“As much as we need to understand why we beat them last year, we need to develop that, be clever and smart and be able to score points,” he added.

“We need to keep doing what we are doing well, keep our skills high and if we do that again this weekend, we are going to put ourselves in a strong position.”

Scotland are 3.10 to win in Paris on Sunday, while they can be backed at 10.00 to win the Six Nations Championship.