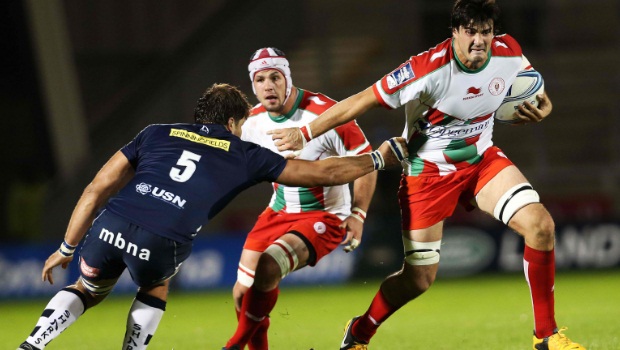 Sale Sharks began their quest for a third Amlin Challenge Cup with an easy 33-10 victory over Biarritz in Salford.

The Sharks were always in command in the Pool 1 tie, and in truth the scoreline could have been even bigger, but it any case it was a most encouraging start from Bryan Redpath’s side.

A solo effort and two penalty tries from Andrei Ostrikov, 16 kicked points from Joe Ford, and a conversion from Danny Cipriani did the damage against a side that lined up on the back of seven defeats in eight Top 14 fixtures.

In addition the visitors left Dimitri Yachvili on the bench, a move that suggests their hearts are not really in the competition.

Sale themselves lined up with a few changes as they obviously want to focus on the decent start they have made in the Aviva Premiership, lying as they do in fifth place after three wins.

The Sharks had the game won by the time Cipriani entered the fray with 20 minutes to go, and even though Biarritz saw prop Francisco Gomez Kodela yellow carded, Sale did not manage to pile on too many more points, with just a further penalty try added five minutes from time.

Elsewhere, Bayonne comfortable saw off fellow French side Grenoble 37-6 in Pool 4, but left it late to grab what could turn out to be a vital bonus point, while there was no shock in the Pool 5 game as Stade Francais trounced competition debutants Lusitanos of Portugal 61-3.