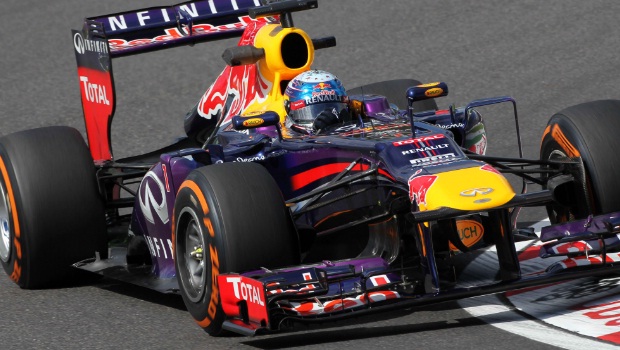 Sebastian Vettel posted the fastest time in Friday practice for the Japanese Grand Prix as he bids to win a fourth successive F1 Championship.

The German has been in unstoppable form, winning the last four F1 events on the circuit, and made it clear that he is no mood to take his foot off the pedal by scorching round the Suzuku circuit in one minute 33.852 seconds in Friday’s second practice.

His Red Bull partner Marc Webber was second quickest after the Mercedes pair of Lewis Hamilton and Nico Rosberg had posted a one-two in the first session that was conducted on hard tyres, before medium ones were fitted for the second practice session.

Vettel is confident ahead of the race on Sunday but knows he is not past the line yet.

“The car balance is decent, but I think we can still improve. Looking after the tyres will be important here, especially during the race. The car works fine at the moment, but we need to make sure we set it up the right way,” he said.

“It’s good to see we are up there today, but it’s not always so important; we need to step up our game for tomorrow, as Mercedes will be strong in qualifying.”

Fernando Alonso, who sits 77 points behind Vettel in the championship table, ended practice in 10th and was slower in both sessions than last year’s runner-up and his Ferrari team-mate Felipe Massa.

If Vettel wins on Sunday and Alonso does not make the first eight home, Red Bull will celebrate winning the title with still four legs to go. The statistics all point to the German who has won three of the last four races at Suzuku, and sealed the title there two years ago.