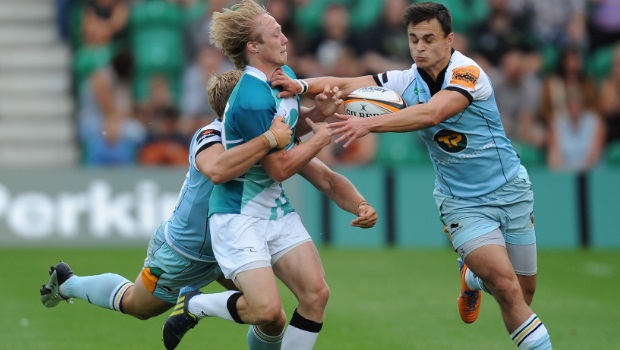 Having fallen at the final hurdle in last season’s Grand Final, Northampton Saints have high hopes for the new Aviva Premiership season.

The campaign gets under way on Friday evening when newly promoted Newcastle Falcons play Bath, but Saints begin their campaign on Saturday with a home game against the Exeter Chiefs.

They have made two big signings in a bid to stop a repeat of last season’s Grand Final defeat to Leicester Tigers, with the capture of two British & Irish Lions heroes, George North and Alex Corbisiero, while New Zealander Glen Dickson has been drafted in to help shore up the backline.

It is wing North though who is by far the highest profile signing, having scored a brilliant individual try against the Wallabies during the successful Lions tour to advertise his talent.

The 21-year-old has left Llanelli Scarlets in search of trophies, and has plenty of years in him to achieve his dream.

Saints director of rugby Jim Mallinder has a strong squad at his disposal, but had a tough decision to make in letting Dylan Hartley retain the captaincy after his red card in last season’s Grand Final at Twickenham.

Hartley received an 11-week ban that saw him miss out on the Lions tour, and Mallinder is hoping that his decision to keep faith in the 27-year-old is vindicated.

“We didn’t jump to it and took a lot of time to decide what was the right thing to do with regards the captaincy,” he said.

“I spoke with a lot of people – coaches, other senior players and with Dylan himself for a long time. But this will now be Dylan’s fifth season as captain. He’s not too old, but very experienced and we decided he was the right man to take us forward.”