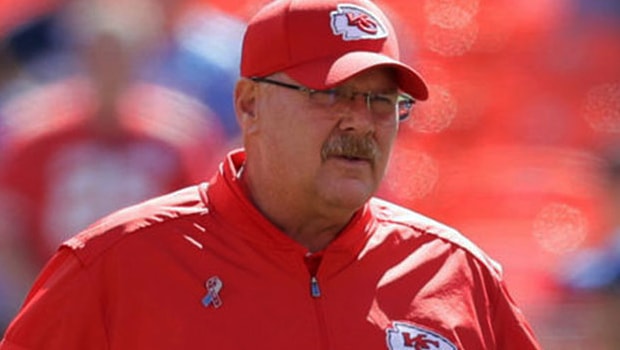 Head coach Andy Reid has hailed the mental strength of Kareem Hunt on debut after Kansas City pulled off a shock 42-27 victory over defending Super Bowl champions New England Patriots in the opening game of the season.

The Patriots, once again armed with the legendary Tom Brady at quarterback, were heavy favourites to start the new campaign off in perfect fashion after adding considerable strength to their ranks.

Julian Edelman may be lost for the season but the Pats made trades for Brandin Cooks and Phillip Dorset, adding depth to the offence, while Rob Gronkowksi is fully fit again and complimented by ex-Colts TE Dwayne Allen.

Former Bills CB Stephon Gilmore has also joined on defence – adding to the number one-ranked unit in 2016 – but New England suffered a big setback in Week One.

Kansas’ rookie Hunt, who fumbled on his first ever NFL carry, finished with 246 yards from scrimmage – the most ever by a player on their NFL debut – with 148 yards coming from rushing while the other 98 were made through the air with five catches.

QB Alex Smith also put in an impressive performance, throwing four touchdowns in a 368-yard display – only his seventh career game with 300-plus passing yards.

Reid reserved particular praise for Hunt, with the head coach delighted the rookie was able to brush off the early mistake and bounce back with a stunning display.

“Our rookie running back just did a tremendous job,” he said. “It started out just a little bit shaky but it was all heart.

I mean he was trying hard, tried maybe a step too hard and the ball popped out, but I am proud of him for getting right back on it and doing a good job.”

Kansas are 19.00 to win the Super Bowl while New England, who produced the greatest ever comeback last season to win the main event, remain 5.00 favourites.