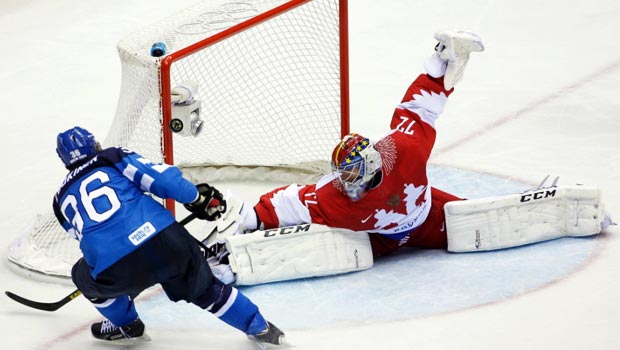 Finland’s men’s ice hockey team are still in the hunt for the gold medal in Sochi after beating the hosts Russia 3-1.

A look at the statistics between the two sides before face-off revealed that the Fins had actually beaten Russia four times in their last six meetings, but the overwhelming opinion in the Bolshoy Ice Dome was that the hosts would prevail to reach the semi-finals.

There was an air of expectancy in the stadium right from the start, and Russia began well, and after eight minutes took the lead through Ilya Kovalchuk, whose shot dipped in under the bar.

That just encouraged the Fins, bronze medalists four years ago, to fight back, and less than two minutes later they were level when Juhamatti Aaltonen steered the puck along the line before forcing it past keeper Varlamov.

After the turnover it was all Finland, and with three minutes of the opening period remaining, Teemu Selanne gave them the lead with a cheeky shot between the keeper’s legs.

It was all over six minutes into the second period when Granlund pounced on a loose pass to convert, and send Finland into the last four.

At the age of 43, Selanne is the oldest player on the ice in Sochi, and brought his vast experience into the encounter.

“We had nothing to lose. We were not supposed to win. They (Russia) had all the pressure,” he said.

“I think they were out of gas a little bit, and we tried to take advantage of that, and the game plan worked.”

Finland will now play the top seeds Sweden in one of Friday’s two semi-finals, a rematch of the 2006 gold medal game, that Sweden won 3-2.