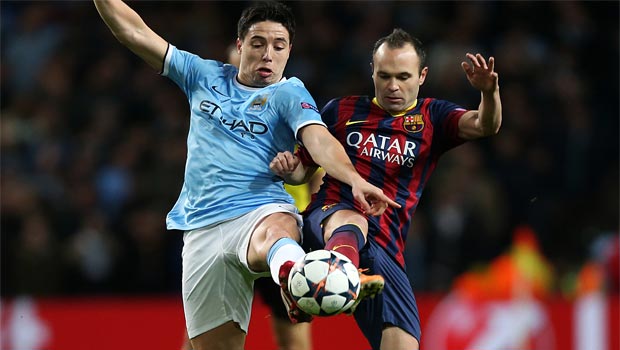 Manchester City midfielder Samir Nasri still believes that his side can make it through to the Champions League quarter finals despite losing 2-0 at home to Barcelona in the first-leg of their last-16 tie on Tuesday.

Nasri does not think that Barcelona are as good as the current champions Bayern Munich, whom Manchester City have already beaten in Germany this season.

Also, he reckons that the Nou Camp is not the fortress it once was, pointing out that Valencia have gone there and triumphed this term.

The Frenchman also believes that City’s counter-attacking style will help in their quest to turn things round, especially if striker Sergio Aguero is back after injury.

“Before the game, we said it is a game of 180 minutes, and we can do what Valencia did and beat them at home. We will fight until the end.

“We will have to gamble, but why not? We went to Munich and beat them, so we can do the same.

“It does not change anything in our belief and our quality. We believe in ourselves.

“They are the best team, Barcelona are not. If it was not for the penalty, it was 0-0. Bayern was not the same.

“We did not touch the ball, they scored goals without a mistake from anyone. They showed us how great they were. I am convinced that Bayern are the best team we have played against.

“Sergio Aguero will also be back, we will be fitter, so why not because he makes such a big difference.”

From all of that, if coach Manuel Pellegrini were to let Nasri do the pre-match team talk, City would not just turn the tie round, but coast home.