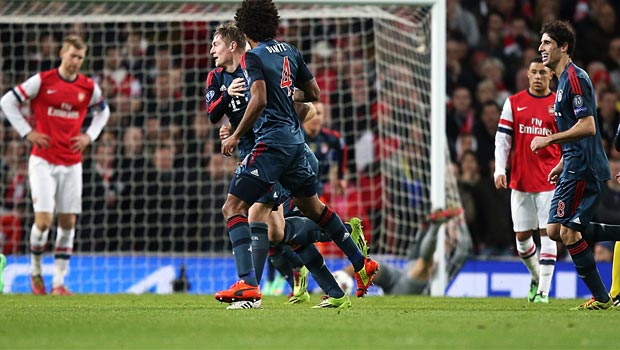 A Toni Kroos goal helped Bayern Munich to a comfortable victory over Arsenal in their Champions League last-16 first-leg tie at the Emirates on Wednesday.

Bayern Munich, the reigning Champions League cup holders, turned up at the Emirates in confident mood, with the Bundesliga already practically sewn up thanks to a 16-point lead, and in the knowledge that they have not failed to score in their last 50 matches.

Arsenal started the match brightly enough, and even had a chance of taking the lead when the referee awarded them a penalty after Jerome Boateng brought down Mesut Ozil. The German midfielder produced a weak left-foot shot though and saw his childhood friend Manuel Neuer palm it away.

Worse was to come for the Gunners when after 32 minutes, goalkeeper Wojciech Szczesny was sent off for bringing down Arjen Robbin, but at least substitute goalkeeper Lukasz Fabianski, for whom Santi Cazorla was sacrificed, saw David Alaba’s spot-kick hit the post.

That only delayed the inevitable though, and Bayern finally saw their pressure pay off after 54 minutes when Kroos unleashed a superb effort into the top corner to make it 1-0.

The visitors were well on top from them on, and it was no surprise when substitute Thomas Muller got the second with a close-range header two minutes from time to virtually book Bayern’s place in the quarter-finals.

Arsene Wenger was unhappy with the referee’s contribution though.

“The referee made a decision that basically killed the game,” said the Gunners boss.

“I think our keeper went in for the ball, he touched Robben who made more of it (than he should) and I told Robben that.