Posted by Vincent Henderson on December 1, 2016 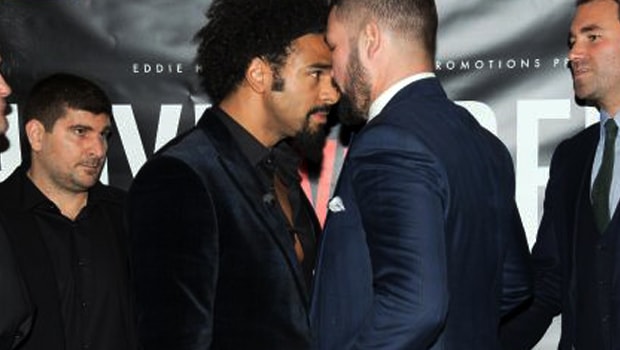 Tony Bellew believes he already has David Haye “rattled” ahead of their highly-anticipated bout on March 4.

The pair were confirmed to fight last week, with WBC cruiserweight champion Bellew stepping up to heavyweight for the fight at the O2 Arena.

Both have been bad-mouthing each other in recent weeks, with them almost coming to blows following the Liverpudlian’s recent win over BJ Flores.

Wednesday saw them meet face to face for the first time in the build-up to the fight and it did not go off without drama.

As they squared up, they touched heads and while they were being separated after Bellew had pushed Haye away, the Londoner threw a punch at his opponent.

Speaking afterwards, the 34-year-old Bellew said he believes he has his opponent on the ropes three months from their fight, claiming Wednesday’s clash shows he already has a psychological advantage.

“Why he is throwing a punch? I don’t know, he’s a maniac, he’s crazy. Listen in the position that he is in, it can do that to you.”

He added: “He’s in a dangerous position, his life is in turmoil, he needs this fight on as fast as possible. He needs to cash Tony Bellew in, it’s not going to happen on March 4.”

Meanwhile, fellow British heavyweight Anthony Joshua is in action next Saturday, when he takes on Eric Molina, a fight he is the massive 1.02 favourite to win, with his American opponent 15.00.