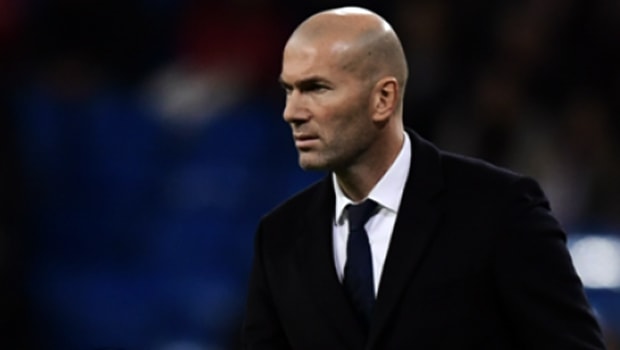 Real Madrid boss Zinedine Zidane insists Saturday’s first El Clasico of the season will not be “decisive” in the La Liga title race.

The coach watched on as Los Blancos crushed Cultural Leonesa 6-1 in the Copa del Rey in midweek, with his son Enzo netting on his senior debut for the club.

However, having rested the majority of his stars against the Segunda Division B outfit, the Frenchman will now turn his attentions to this weekend’s trip to the Nou Camp.

Real currently sit six points clear at the top of La Liga and will head to Catalonia eyeing their seventh straight victory in the league.

They may be boosted by the presence of defensive midfielder Casemiro, who came through Wednesday’s game unscathed after two months out with a leg injury.

Having won last season at the Nou Camp, Real are 4.00 to take the points on Saturday, with the draw the same price and the Blaugrana the 1.83 favourites on home soil.

In contrast to Los Blancos’ fine recent run, Barcelona have appeared to be in somewhat of a slump, failing to win in the Copa del Rey on Wednesday just days after boss Luis Enrique had slammed their performance after they drew 1-1 at Real Sociedad.

However, Zidane feels Saturday’s clash will not have a significant bearing on the title race and is preparing his team for a tough game.

He told reporters: “Clasico? We’re only thinking about that match, but whatever happens won’t be decisive.

“We’ll surely suffer so we must be well prepared, we all need to rest, me being the first, but no, it won’t be decisive at all.”