Olympic Ice Hockey: USA on course for Gold on ice 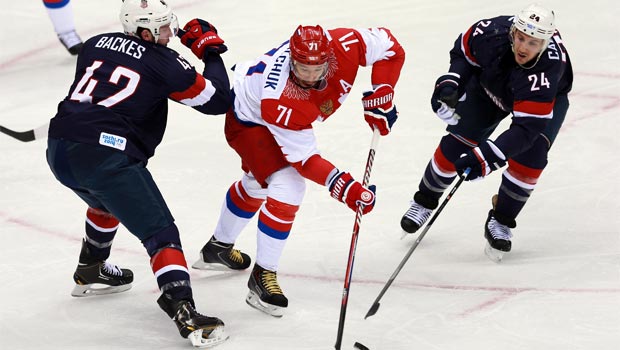 The United States men’s ice hockey team are just three ties away from winning an Olympic gold medal for the first time since 1980.

Sunday’s 5-1 victory over Slovenia, in which Phil Kessel scored a hat-trick – the first American in a decade to do so in an Olympic hockey tournament – ensured that the US stayed in the mix for a potential final with Russia on Sunday.

The US are now undefeated since landing in Sochi, and having beaten both Slovenia and Slovakia, showed that they are a team to be feared by getting the better of Russia in a shootout last week.

None of the current squad was even born when the US men’s ice hockey team famously beat the then all-conquering Russian side at Lake Placid 34 years ago, in a match still known as the ‘Miracle on Ice’ after a side made up of collegiate and amateur players beat the Russians who had won six of the last seven Olympic gold medals.

Kessel’s hat-trick has secured a quarter-final berth for the US, and with a goals tally of 15 for and just four conceded so far, hopes are high that they can go all the way despite the claims of the hosts, and indeed Canada and Sweden.

With the United States securing top spot in Group A, Russia can only finish runners-up and also will now have to hope that they secure the best second place record to progress.

Saturday’s loss to the US was followed by another shootout against winless Slovakia, but this time they managed to scrape through.

Russian forward Alex Ovechkin was realistic in summing up how things have gone so far for the hosts.

“Overall we’ve played well. Everybody wants to beat Russia at home,” he said.

“It’s the Olympic Games; nobody wants to make mistakes.

“We take what we take, and we’re going to play in the future.”

Russia will be very disappointed if they cannot overcome winless Norway, the bottom side in Group B, on Tuesday, and will be confident of joining the US in the quarter-finals that begin on Wednesday.

The semi-finals take place on Friday and the final is on Sunday.