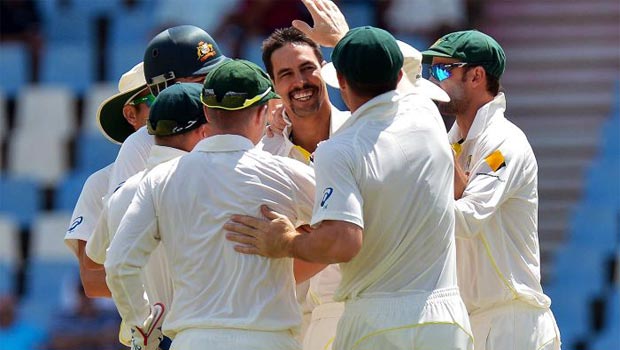 Australia’s cricketers will bid to inflict a second straight defeat on South Africa when the second of three Tests gets under way on Thursday.

South Africa had no answer to the lightning fast bowling of Mitchell Johnson in the 281-run defeat in Pretoria over the weekend, with the paceman taking 12 wickets for 127 runs, and will be praying that he is not in the same mood when play gets under way at St George’s Park, Port Elizabeth, on Thursday.

More bad news for the Proteas is that the tourists have the luxury of too many in-form players to choose from due to the fact that all-rounder Shane Watson has recovered from the calf injury that forced him to miss out on the first test.

In his absence, Shaun Marsh scored a century on his first test appearance for two years, while Alex Doolan contributed 89 runs.

Australia coach Darren Lehmann said: “We’ll have to see how Shane’s going in the next couple of days. We probably won’t have an idea until we get down there and train and see what’s happening.

“Obviously we’ll have to see what the wicket is like; whether we need the extra bowling option.

“You’d like him to bowl. Firstly we’ve got to get him fit, and then we’ll see what happens from there. He’s pretty close; he was running on Sunday.”

Captain Michael Clarke added: “Fortunately I’m not a selector but it’s a nice problem to have. We’ll wait to see what the selectors come up with.”

The third and final test begins on March 1 in Cape Town before the two international sides contest the first of three T20 matches back at Port Elizabeth a week later. The final two T20’s will take place in Durban and at Centurion respectively.