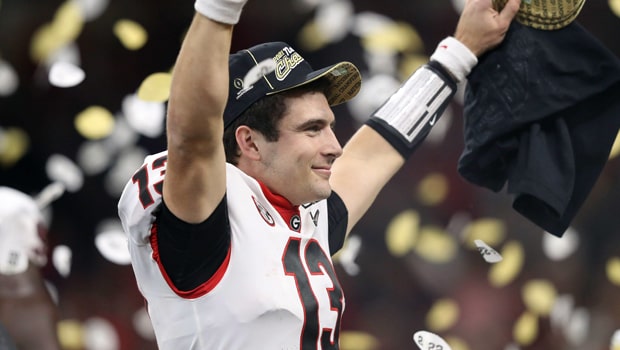 The Georgia Bulldogs ended a 41-year title drought Monday night as quarterback Stetson Bennett led the way to take down rival Alabama 33-18 in the College Football Playoff title game. Georgia won its first national title since Herschel Walker led the Bulldogs to a title back in 1980.

“I cried, so pretty good,” Bennett said when asked what it felt like to win on such a big stage.

Bennett, a one-time walk-on who became a starter, finished the game with 224 passing yards and zero INTs.

“We played a heck of a game against a heck of a team for the first three quarters of the game,” Saban said. “Nobody can take the SEC championship away from this team, the Cotton Bowl championship. We just didn’t finish the way we needed to finish.”

Kelee Ringo sealed the game with a pick-six as the clocked turned to just under a minute in the fourth quarter. The score was 26-18 with Alabama driving before that interception.

“There were people that said we weren’t conditioned enough, and it pissed a lot of people off on our sideline — and they went to work,” Smart said after the title win. “Before we came today, we burned the boats, and we came a fighting.”

“You guys kicked our ass in the 4th quarter,” Saban said to Smart as they shook hands following the final whistle.

Not only was this Georgia’s first national title since 1980, but it was also the Bulldogs’ first win over Alabama since 2007. Quite the finish to the college football season.