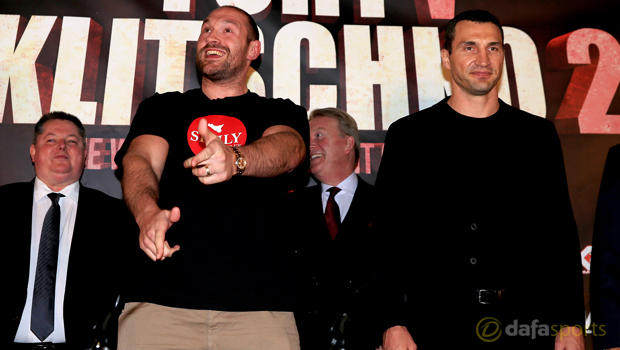 The Ukrainian is looking for revenge on July 9 when he takes on Fury in Manchester for the WBA super and WBO belts.

Fury beat Klitschko in Germany last November thanks to a unanimous points victory but he has hit the headlines for the wrong reasons since his win.

In the build-up to their rematch, Klitschko has slammed his rival’s behaviour outside of the ring but Fury has kept himself locked away as he prepares to get in shape before fight night.

Joshua will defend his IBF title for the first time against Dominic Breazele on Saturday night and Klitschko admits the duo could meet in the near future.

The 40-year-old feels he must do more in the ring against Fury this time around but is adamant he will clean up boxing by beating him.

“It’s not just British fans I’ll be doing a favour when I beat him [Fury], it’ll be for Klitschko fans and boxing fans in general,” he told Sky Sports.

“It’s just something we don’t need in this world, it’s beyond boxing. I’m totally not on the same page as him.

There’s a lot of ‘BS’ coming out of his mouth and I’m not buying it.

“There was a lack of punches thrown and whatever it was I’m going to fix it,” he added.

“I never thought about retirement. Because there was nothing leading me to that. I don’t actually believe what happened.”