Posted by Vincent Henderson on October 28, 2015 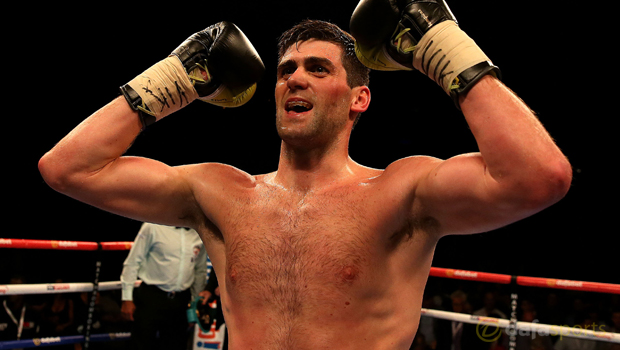 Super-middleweight Rocky Fielding insists he is happy to be regarded as the underdog as he prepares to take on rival Callum Smith for the British title.

The two emerging super-middleweights will go head-to-head in their home town of Liverpool at the Echo Arena on November 7.

Smith has been the subject of most of the talk in the build-up as he looks to follow in the footsteps of his brothers.

The 25-year-old comes from a famous fighting family with siblings Paul, Stephen and Liam all highly-regarded in the sport.

Liam currently holds the WBO light middleweight title and Callum is hoping to emulate his brother’s achievements by claiming the British title next month.

Fielding insists he welcomes all the attention being placed on his opponent and believes he can cause an upset to take the vacant belt.

Fielding said: “The talk is around Callum, and the pressure.

“Everyone is expecting him to win. I’m confident of winning, there’s no pressure on me.

Fielding currently boasts an unblemished 21-0 record and revealed he has enlisted the help of various body shapes and sizes during his training regime.

The 28-year-old admitted that he is ready for anything that comes his way and would even be happy to stand in the centre and “scrap”.

He added: “We’ve covered everything with our sparring – big, strong lads with good power shots.

“It was good sparring but it’s about what I can do to them, and my tactics to get the game-plan ready for the night.

Fielding is priced at 3.75 to claim victory with Smith installed as the 1.25 favourite, while the draw can be backed at 26.00.