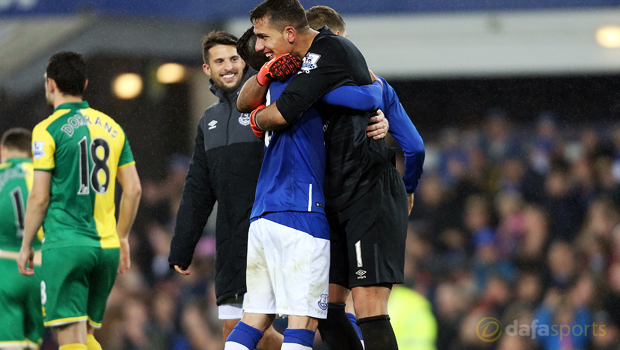 Everton manager Roberto Martinez has praised second string goalkeeper Joel Robles for his heroic performance in the Capital One Cup over Norwich on Tuesday.

The Toffees, who are priced at 9.00 to win the Capital One Cup, secured their progression to the quarter-finals of the domestic competition with a penalty shoot-out victory after playing out a 1-1 draw.

Sebastien Bassong put the Canaries into the lead early in the second half before veteran Leon Osman levelled 17 minutes later.

The two Premier League clubs could not be separated over the course of 120 minutes and Everton eventually wrapped up the win on penalties.

Martinez made a number of changes to his side following the weekend defeat to Arsenal and back-up stopper Robles was handed another cup start.

The Spaniard made some crucial saves throughout the tie and Martinez admitted it is great to have such strong competition between the sticks.

Martinez said: “Joel was, throughout the game, himself. I thought he had the moment of the game – his save from Lewis Grabban was terrific.

“His composure and demeanour was very good and his penalty save from Wes Hoolahan was very impressive.

“I am very pleased for Joel because he had been working very hard behind the scenes and is starting to show how reliable he is.”

However, despite Robles doing the job required Martinez confirmed that Tim Howard, who has been criticised for some poor performances this term, will be restored for the home clash with Sunderland on Sunday.

He added: “Tim has incredible standards and he can’t be happy with the goals we conceded at the weekend.

“But there’s not even a doubt in terms of Tim Howard starting at the weekend.”

Everton can be backed at 1.50 to claim victory over Sunderland, who are priced at 7.00, while the draw is available at 4.20 ahead of Sunday’s clash at Goodison Park.