Boxing: Manny Pacquiao’s clash with Amir Khan is off

Posted by Vincent Henderson on March 9, 2017 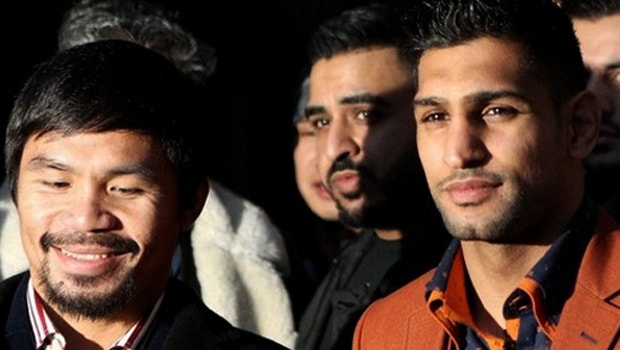 The proposed meeting of Manny Pacquiao and Amir Khan next month is off, says the Filipino’s promoter Bob Arum.

The two fighters had announced via social media they were likely to meet next month in the United Arab Emirates, following a vote organised by Pacquiao to select his next opponent.

Britain’s Khan, a silver medallist as a lightweight at the 2004 Olympic Games, beat off the likes of compatriot Kell Brook, Australia’s Jeff Horn and American Terence Crawford with 48-per-cent of the vote.

However, it now looks as though the bout will not take place, at least not at this point in time.

“It’s kaddish for the UAE deal. It’s dead,” Arum told ESPN. “I’m talking about another proposal for another fight, not Khan. Khan won’t be Manny’s next opponent.”

Arum also confirmed to the Los Angeles Times that the $38m offer for the bout had failed to materialise and that the duo could not face each other until the second half of 2017, under revised terms.

Pacquiao, who has won 59 of his 67 bouts, claimed the WBO title with a unanimous points decision against American Jessie Vargas in Las Vegas last November.

Khan has not fought since May 2016, when he went up a couple of weight divisions to challenge Mexico’s Saul Alvarez for the WBC middleweight title, but was knocked out in the sixth round.

Gennady Golovkin is 1.13 to defeat Daniel Jacobs when they clash on March 19 at Madison Square Garden. Jacobs is 6.00 to win.