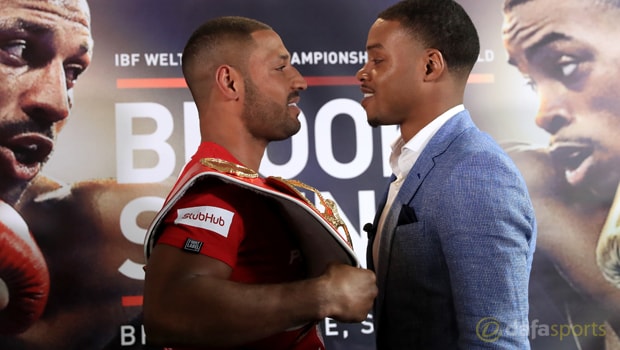 Kell Brook says he is planning to “make history” when he fights Errol Spence Jr. on May 27 in his hometown of Sheffield.

The date of the fight was confirmed on Wednesday, with the bout set to take place at the home of the Special One’s beloved Sheffield United, Bramall Lane.

It will mark the first time he has stepped into the ring competitively since going down to Gennady Golovkin last September and with him due to put his IBF world crown on the line, will see the 30-year-old return to his more natural welterweight.

Spence is a dangerous customer though and the southpaw will arrive in Sheffield defending a perfect record from all 21 of his professional fights.

The Truth has also had plenty of time off following his last outing but is sure to be raring to go on the occasion of his first shot at a world title.

Brook though is confident that he will retain his belt and has promised to put on a show in front of his hometown crowd.

“I’m so excited about this fight and to make history in my city,” said Brook.

“It’s long been a dream of mine to fight outdoors at Bramall Lane and I’m pleased to do that in the biggest fight in the welterweight division.

“All I’ve ever wanted to do is to give the fans the fights they want and they have it right here on May 27.

“I’m going to show the world that I’m the best welterweight on the planet and I’m going to do it right before my people’s eyes.”