Posted by Vincent Henderson on December 9, 2016 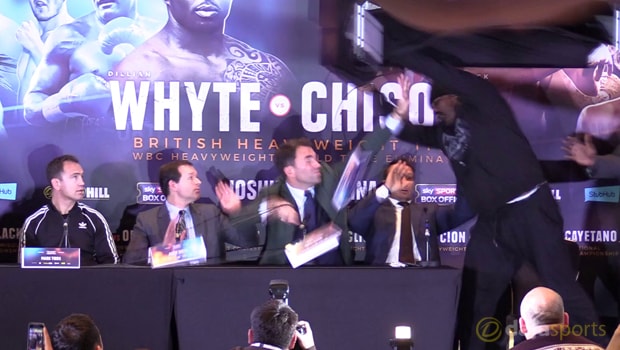 Dereck Chisora admits he regrets his antics at Wednesday’s press conference although he is pleased his fight with Dillian Whyte will still go ahead.

The British Boxing Board of Control called an emergency meeting on Thursday after Chisora hurled a table at Whyte during the press conference, but they have now decided to allow the fight to take place.

The 32-year-old has not escaped without any repercussions however, as he has received a £25,000 fine for his antics, as well as an additional £5,000 in costs and a suspended two-year sentence which will lead to him receiving an immediate ban if he is involved in any more misdemeanours.

The two fighters will now weigh in for the bout on Friday, although they will do so at separate times and there will be no customary face-off, while the British heavyweight title, currently held by Whyte, will no longer be on the line.

Chisora admits that he now regrets his actions, but he is pleased the board have allowed the fight, which is on the undercard for Anthony Joshua’s IBF title defence against Eric Molina, to take place.

The Zimbabwean born fighter insists he is now fully focused on Saturday’s bout and he is convinced he has what it takes to beat Whyte.

He added: “I can’t wait for the fight. I know I have more power than this guy.”