Posted by Vincent Henderson on December 10, 2016 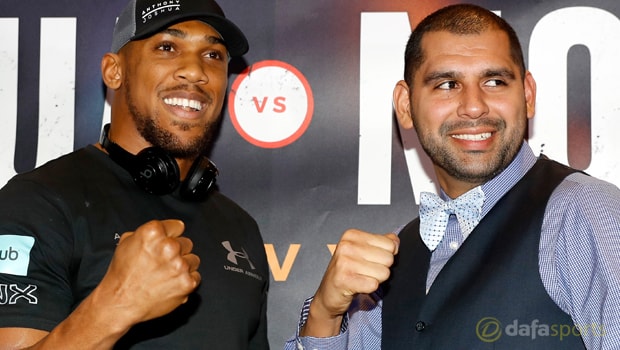 Anthony Joshua insists he will not allow fame and fortune to distract him as he prepares for the second defence of his IBF heavyweight title against Eric Molina on Saturday.

The 27-year-old claimed the title with a second round knockout victory over American Charles Martin in June and he is reportedly set to earn £2million from Saturday’s bout.

The Olympic gold medallist is expected to take on veteran heavyweight Wladimir Klitschko if he successfully comes through his second defence in Manchester.

Reports claim that the Brit could pocket as much as £15million from a headline match-up with the Ukrainian if they go toe-to-toe in April.

However, he insists he is not allowing the lure of fame along with his new found fortune to go to his head and affect his performance in the ring.

Joshua still lives at home with his mum and regularly shares a Sheffield gym with a number of amateurs also trained by his coach Rob McCracken.

The heavyweight feels it helps to keep him grounded and motivated to be the dominant force in the division.

Joshua said: “Fighters can lose their way after tasting a bit of success but it’s not about money, it’s about class.

“It’s about morals, how you conduct yourself. Glitz and glamour doesn’t come into it. I don’t live in luxury, I’m still at home with my mum.

“These amateurs who train day in, day out and live the life are better than half the pros who are taking the glory.

“It’s good to be around that, they don’t give me a chance to slack.”