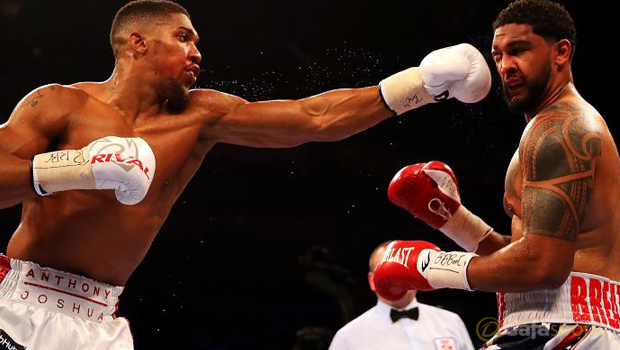 Anthony Joshua insists he is ready to take on any of the world’s elite in the heavyweight division after successfully defending his IBF title against Dominic Breazeale.

The Brit claimed a seventh-round victory to inflict a first ever professional defeat on his American opponent at London’s O2 Arena on Saturday night.

Joshua knocked Breazeale to the canvas on two occasions in what was a comfortable win and he is already looking ahead to his next bout.

The London 2012 Olympic gold medallist is now thinking about unifying the heavyweight division as he looks to assert his dominance.

The 26-year-old is yet to face anyone capable of providing a stern test and now boasts an impressive record of 17 wins, with all of them coming inside the distance.

The IBF champion’s next fight is likely to come against New Zealand’s Joseph Parker, who is the mandatory challenger.

However, a potential meeting with Tyson Fury now looks in doubt as the WBC and WBO champion has been forced to postpone his clash with Wladimir Klitschko due to injury.

American Deontay Wilder currently holds the WBC strap and could cross paths with Joshua if he comes through his match with Parker.

Joshua insists he is happy to fight any of the leading names in the division. “I’m in a good position,” said Joshua.

“Wilder, Fury, Haye, I’d fight any one of them, and they all want me. “I was really looking at Tyson Fury.

I hope he gets better soon, as I was hoping to get that sometime in the winter if everything went well.

“We’re going to have to reschedule that and look at other opponents like Parker if he’s vacant or anybody else that the people want.

“I need to rest. I’m tired. I’m working hard. And now I can get some rest and recharge my batteries and start afresh again.”