Posted by Vincent Henderson on December 8, 2016 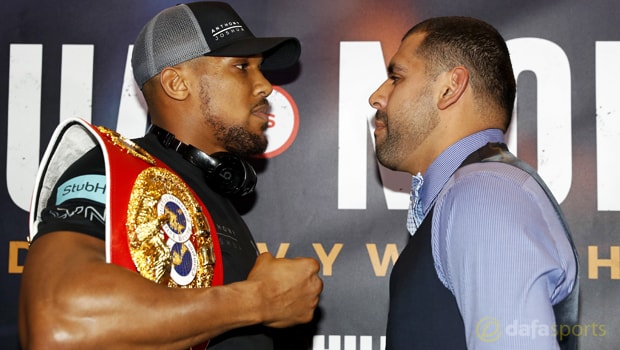 Anthony Joshua insists the spectre of a potential fight with Wladimir Klitschko will not distract him when he steps into the ring with Eric Molina on Saturday.

The 27-year-old has continued his meteoric rise in 2016, winning the IBF world heavyweight title from Charles Martin in April, before successfully defending his belt against Dominic Breazeale.

He is now looking to round off the year with another defence when he meets Molina and is the outstanding 1.02 favourite to triumph, with the draw 34.00 and his American opponent priced at 15.00.

Things could have been so much different for Joshua though, with him previously having hoped to meet Dr Steelhammer himself this weekend, only for Klitschko to be forced to withdraw from the talks when an agreement was close due to a minor injury.

The pair could still face each other early next year and the scale of that potential bout may act as a distraction for Joshua heading into this weekend’s outing in Manchester.

However, it would be foolish to overlook Molina, with the American already having taken WBC champion Deontay Wilder to nine rounds in his previous world title shot in June 2015.

Joshua has now moved to rule out any talk of complacency, insisting that he has the mental strength required to focus on the task at hand.

“It’s a great opportunity but it’s not reality yet. I can only deal with what is in front of me,” he told Newsbeat.

“I think they’ve put this hurdle in the way and I might have to overcome some situations, but providing I do so I think I will be able to fulfil my destiny in 2017.”