Posted by Vincent Henderson on December 15, 2016 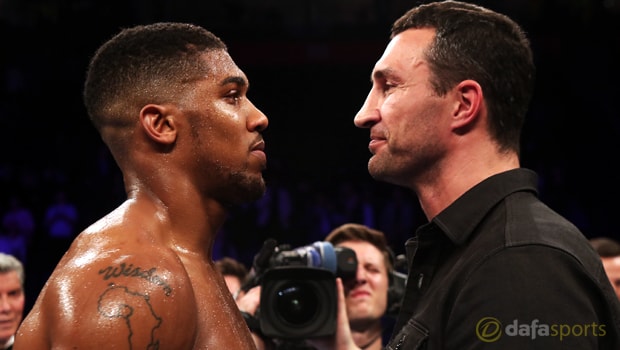 Anthony Joshua believes beating Wladimir Klitschko on April 29 will see him become a legend of the boxing world.

The duo are set to meet at Wembley for Joshua’s IBF world heavyweight crown, with former champion Klitschko competing for the first time since going down to Tyson Fury in November 2015.

During that time, the 2012 Olympic champion, who is the 1.50 favourite, has beaten Dillian Whyte, Charles Martin, Dominic Breazeale and Eric Molina to take his professional record to 18 knockout wins in as many outings.

The pair had previously been on course to meet this year but Dr Steelhammer was forced to withdraw before a deal could be completed due to a minor injury.

However, with the bout all signed and sealed last month, they met in front of the press on Wednesday to discuss the fight.

Unlike with other boxers, both are known for being cordial towards their opponents and the event went off without a hitch.

Despite the smiles, Joshua knows full well that this could be the fight that takes him to the next level and is also aware that his 40-year-old opponent, who is 2.63 to win, is a class above anyone he has faced before.

With the potential for a British record attendance at Wembley, the 27-year-old is in no doubt just how much this bout could mean to his career and says beating the veteran on April 29 will help him write his name in the history books.

“It’s now about beating the right people to go down in history,” Joshua said. “This is the start of a legendary campaign.”

“This is a fight that can change me from champion to legend overnight. Wladimir is a man I need to defeat to start building my reputation.”